Food On The Go

I'm sorry to say that I didn't get nearly as much great food on this trip as I'd hoped. Some of that was due to my insane schedule and the amount of running around I had to do, and some of it is, I think, due to the fact that the cool little dives which once existed in New York have been priced out of what is now a grim, expensive city.

I was also based a lot of the time in suburban New Jersey, as opposed to what I'd call exurban New Jersey (Jersey City, Newark, etc), although there was a good pizzeria (two, actually) in the town I stayed in, as well as the worst Italian place I've eaten at in ages. (Garlic powder in the "garlic spinach" sauce on the pasta? That's impressive in this day and age!) I had a fine sausage-and-peppers sandwich one day and a slice of pizza stuffed with baked ziti (which would have been better if the red sauce that came with it had been edible) another day that brought back some distant nostalgia.

My first evening's meal in New York sent me and my friends to the Saigon Grill on University Place, where there were tremendous summer rolls and a mindblowing "Vietnamese bouillabaisse" so full of seafood (including real crab, not surimi) that I almost ignored the sweet-spicy broth. Highly recommended if you're in the neighborhood, although there's also a branch of Madhur Jaffrey's highly successful and mega-tasty Cafe Spice very nearby. Didn't get there this time.

The next night, although I wasn't wild about more Indian food since I'd just had some on Air India, I met with some folks at a place called Angon on East 6th St., in the middle of that gaggle of Indian restaurants. I was afraid it was going to be like all of them there, but it wasn't. It wasn't unlike them, but it was different. The samosa chaat and the pani puri appetizers were quite distinctive (even if the latter was rather bland), the the khichuri rice dish was another change from the usual stuff.

The next day I met a friend for a really forgettable lunch at a supposed Thai restaurant in the Village. I was already suspicious when the waiter took our orders in Chinese, but soggy pad thai noodles clinched the deal. For dinner, I was with the guy who'd recommended Saigon Grill, so his recommendation of another Vietnamese place, Bao Noodles, was eagerly accepted. Sad to say, they were having an off night, and we were disappointed.

Then it was off on the train to Montreal, fortified with a bagel and coffee from Seattle's Finest (Starbuck's hasn't won -- yet), and I've already commented on la cuisine d'Amtrak. The first dinner was an amazing cassoulet at my hosts' place, with an equally stunning wine I forgot to note. The meats were all hand-picked by the legendary M. Yves at the Atwater Market: 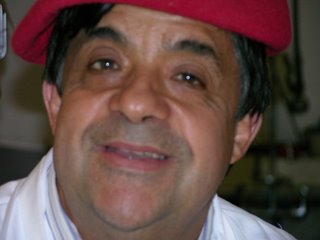 Dessert was a selection of about seven Quebec cheeses, which offered stiff competition to any I've had in France. Man, Quebec's come a long way since I first visited in the mid-'70s!

The next morning, I got a long-held wish, which was to taste the legendary "steel-cut oats" I'd read about. I'm no oatmeal fan, but these barely qualify as oatmeal, especially after a long cooking, dressing with warm cream, and maple syrup bruléed on top with a blowtorch -- not to mention a short shot of whiskey. After that, it was into the car, and a wild trip through Montreal intended to prove to me the superiority of Montreal bagels: 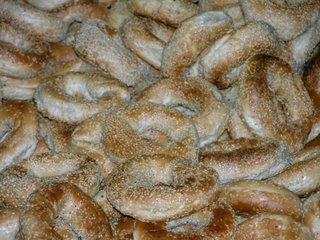 The pictured ones are at St-Viateur, shortly after they've been expertly thrown through the air off the narrow paddle on which they're baked into the pile from which they're selected by customers. I was impressed by the huge stack of 100-lb. sacks of sesame seeds in the bakery area, since apparently the iconic Montreal bagel is a sesame one, but they had other flavors, too. From there we sped to Fairmount Bagels, the dreaded competition, for another dozen. I dutifully sampled each, and, while I agreed with Victoria that the Fairmounts were just a bit better, my problem with Montreal bagels overall is that they're sweet, which bagels should never be unless you're making blueberry bagels or some other form which must be prohibited in the Torah, if not the Old Testament itself. Maybe toasted and buttered they'd be better, but I prefer to think of them the way I think of Cincinnati chili, ie, as a similar, but different foodstuff entirely.

From there it was time for my hosts to do their weekend shopping, which meant stops at both of Montreal's stunning markets, Jean Talon (for vegetables) and Atwater (for meat). Both are available at both places, but it must be admitted that each seems superior to the other in just that way.

It was mid-October, remember, so the glories of the harvest were behind us. I can't imagine what the place must look like in high summer, what with a pepper display like this: 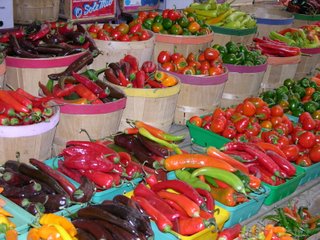 Not to mention psychedelic cauliflower: 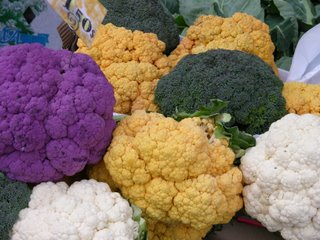 Victoria and Rodney patronize M. Charles' vegetable shop, just outside the market, for a lot of their stuff, and he proudly uncorked a box of white truffles he'd bought. Unfortunately, it was one of two, and the other one had walked out as he was helping several restaurants get their orders together. He said he knew it was someone from one of the restaurants, but he was damned if he could tell whom, or even which restaurant. The display at his place, though, was astonishing.

From there it was off across town to the Atwater Market, where, in addition to even more temptations, they were having an "Octoberfest" of micro-brews from around Quebec that I was in no shape to try due to a cold. Here, the mighty M. Yves plies his trade, and my brain was about to explode from the assembled goodies. As arranged, we met my college pal Terry there, and I escaped with him back to his house for some long-delayed catching up. Victoria pressed the remaining bagels, a wedge of local Shropshire Blue cheese, and a little basket of assorted chiles on him.

Dinner that evening with Victoria and Rodney was at Au Pied de Cochon, a place Anthony Bourdain likes a lot, and it was easy to see why: it's not fancy, but it's exquisite in its quality, which means the prices aren't so high. Oh, there's the odd $1700 bottle on the wine list, but we had a microbrewed stout which suited the meal just fine. I'd settled on a bison rib, after one passed me on a plate, looking perfectly barbequed, and, because they had the gall to offer it, I ordered French onion soup for a starter. What a cliché! What a amazing rendition of it, too! Man, it must've been the onions, because I can't think of what else would have imparted such a rich, sweet yet vegetal flavor to the soup. I almost stood up and cheered. Sadly, the rib, although absolutely perfectly cooked, was marred by a "barbeque" sauce slathered on it which was way too sweet. Because I like this place so much, though, I offer the following advice to them: in Texas, they don't use sauce at all. Really. What they do use is a salt-and-pepper rub, and hey, you folks know, just like I do, that there are salts and there are salts, and there are peppers and there are peppers. I offer this as a clue, and look forward to seeing you deal with it next time I'm up there.

The next day's eating was unmitigated disappointment: bad Jamaican meat patty and bad empanada at a bakery near Terry's house, followed by a meal at a Caribbean restaurant which started out fine with good appetizers and then went sharply downhill. If that's jerk chicken, you guys, then...ahhh, there's a jerk joke in there somewhere. Fageddit.

Tuesday saw me hit Philadelphia to say hi to the Fresh Air crew, and record a couple of pieces. As I traditionally do, I lunched at the Reading Terminal Market, getting a "super Italian" sub at Carmen's-Formerly-Known-As-Rocco's. Dinner was along the same lines, although it was home-made, an Italian sausage lasagne at the home of the Philadelphia Inquirer's blogger Dan Rubin, along with his wife Mimi, my sister, the Rubin twins, and my nephew Peter. And because of a screwup with the hotel I'd been stashed in, I wound up at another one just two blocks from the Reading Terminal again, so I got to eat breakfast at their famous Down Home Diner, which was a bit of a disappointment. Dang, I shoulda ordered scrapple!

The flight back on Air India was smooth, the food good (but not as good as going over, possibly because I passed on the mutton curry and went for the vegetarian dish, which I swear the flight attendant said was "bunny"), and my fellow passengers just as anarchic as before. I got a great meal (my usual: duck terrine, steak au poivre with potatoes au gratin) at Chez Paul, and the next morning I was on my way back to Berlin.

And a surprise awaited me: I got in too late to shop (and was in no condition to do so anyway) so the dancer, who met me at the station, and I decided to investigate Toco Rouge, the Chinese-fusion joint that sprung up in the space where my late lamented Döner place had been. We each had a different soup and entree, and I have to say, this place looks like it's really happening. Open for lunch, too, so I can see soup for lunch in my future. What a pleasant surprise! Hope it lasts.

Of course, Monday took me to the supermarket, where I beheld acres of empty shelves. Okay, home again.
Posted by Ed Ward at 3:45 PM

Looking forward to blogger allowing you to upload the rest of your snaps. And welcome back! Hope the trip's been a success.

Got the rest of 'em up this morning. As for whether the trip was a success, well, that remains to be seen.

Hi Ed, Birthday greetings have bounced back at me, so please send current e-mail address. --Louise

That purple cauliflower is just too scary!

Is it your birthday? Happy birthday then!

You just don't see cruciferous units like that every day. Brrr! I guess it is food heresy to suggest it would be even weirder with cheese sauce.

I think purple cauliflower is perfect for feeding to kids, and with a nice bright orange cheese sauce you could just say "Bet you're scared to eat this!" They'd do it to spite you. That said, cauliflower's not my favorite flavor.

Too bad you didn't get a chance to sample New Jersey's regional specialty: Hot Texas Weiners

It other parts of the US they call them Coney Islands or chili dogs.

link to : hollyeats.com
Ed,you can be the European correspondent for this interesting food group.

I love the thought that something called Hot Texas Weiners is a New Jersey specialty. What I really want to know is where they were hiding when I was a kid and my numerous aunts and uncles all lived in Jersey.