Another Interval, At Last

Tomorrow morning I'll head off to the station and get on a train to Amersfoort, in Holland, where I'll transfer to another train and wind up in Utrecht. Not exactly my top pick for a holiday spot, but it has several advantages. First, a couple of friends from the States I haven't seen in years have done a house-exchange with some people in the suburbs there, and they were nice enough to buy me a ticket to come join them. Second, it's the time of the annual Early Music Festival in Utrecht, and, although I don't have a press pass (boy, is it hard to sell stories like this!) there are plenty of free fringe activities with some younger groups, and that should be fun. Third, we'll go to Amsterdam for a couple of days and I get to show my friends around a place I actually do know something about (I've only been to Utrecht twice and didn't leave the station the second time, because the nightclub Jon Dee Graham was playing in was actually inside the station). And fourth, it's demonstrably Not Berlin. This will be my first trip out of the city limits since March.

I'm going to try to blog from the festival, and I'll be taking the camera along, although I won't post any photos until I get back here on Wednesday. Okay, maybe Thursday. Meanwhile, if anyone knows anything to do in Utrecht between concerts or knows any good restaurants there, let me know!
Posted by Ed Ward at 4:48 PM 3 comments: 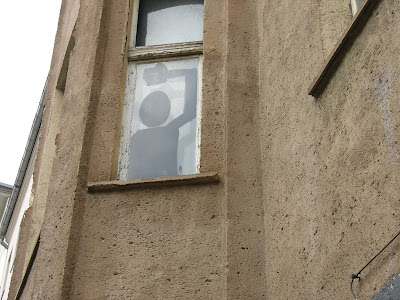 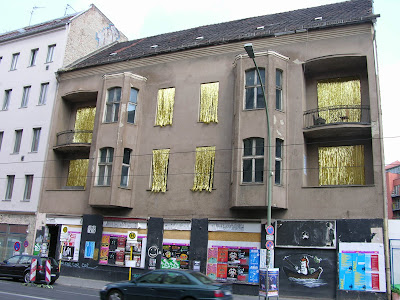 Ah, well, it's better to look out the window anyway, right?
Posted by Ed Ward at 5:02 PM 7 comments:

That doesn't keep me from occasionally feeling like I should throw a couple of Euros away, though, and a few weeks back a really powerful urge came over me. But every time I'd stop at the newsstand where we used to buy our tickets, I'd take a close look at my cash-on-hand and decide against it. The pot was -- for Berlin, where the lottery jackpots are nothing next to what people in the States see -- quite high. But I decided not to.

Then, I noticed a sign in the window. Someone had won €39,900 and change there. It took every bit of logic I had at my command to convince myself that if I had played, that someone would not have been me.

(Of course, that's not really the most depressing event of recent weeks, but I've decided to keep the really depressing stuff off of here for the time being, since there's nothing to be done about it, as far as I can tell.)

Thanks to my eagle-eyed former college roommate JZ off in the wilds of Los Angeles for spotting a couple of news items which will be in the dog-bites-man category for anyone living here.

The first one notes that "German workaholics may be suffering from a lack of sex, according to a university study published Friday." The story went on to say that "A survey of 32,000 men and women by researchers at the University of Göttingen found over 35 percent of those reporting unsatisfying sex lives tended to use hard work as a diversion." Which, of course, explains all those Beamten with their desks piled high with rubber-stamps, who, I have long decided, are only allowed to mate among themselves, because it's the only way they can perpetuate their species. It's not like anyone wants a job like that.

The second one tells the sad story of a young Berlin woman named Dora, a professional model who is apparently the face of Deutsche Telekom's Call & Surf Comfort promotion. Dora, it will surprise absolutely no one to learn, has been waiting three months for Telekom to set up a telephone line in her home, and, in despair, she turned to the media, publicly giving them one week (which'll be the beginning of next week) before going to another provider. The Reuters story says "A Deutsche Telekom spokesman could not be reached for comment," although you could really leave off the last two words there and it'd be just as accurate. One bit of advice, though, Dora: if my friends' experiences are anything to go by, you won't be any happier with Alice, whose own spokesmodel has, I hope, fired her agent.

The doorbell rings. I buzz the person in. Nope, it's not FedEx or UPS with a package, it's yet another person with an incomprehensible accent jamming little bits of paper into the mailboxes as fast as he can. What a way to make a living.

Nobody who's lived here for the past ten years is going to believe this, but when I first came to Berlin in October, 1988 for a visit, the city's first pizza-delivery service had just started up. Now, this isn't to say that there weren't places that'd pack up a pizza to go, but you had to go get it. (I remember a place that I think was called Four Brothers, run by four guys from Philly down in Zehlendorf who mustered out of the Army and opened a place to serve American food, specializing in pizza and fried chicken. Long gone now, of course.)

I remember this because, in my jet-lagged haze, I came upon the guy who was sharing the apartment I was staying in carefully perusing a thin brochure he'd gotten in the mailbox. "I'm deciding which pizza to get," he said. "It's not very good, but they bring it to you!" Dang, I thought, this country must be behind the times. Just a few weeks earlier, I'd house-sat for a friend in New York and practically had to use a shovel to get the Chinese menus out of her mailbox and get to the mail I was saving for her. Early on, there were only a couple of companies doing this, one of which got busted for its inordinately-expensive (DM 50) "Pizza Colombiana" which included a gram of cocaine. (I actually saw the menu for this place, which just had a telephone number, and I don't think you would have had to be Sherlock Holmes to have cracked this case).

But the reason I bring this up is because the vast majority of the guys who stuff mailboxes these days are advertising appliance repair services, and well before pizza menus, these little cards were ubiquitous, numbering up to four or five a day. And I've been wanting to ask for a while: does anyone know anyone out there who's actually used the services on one of these cards? Wouldn't you ask a friend or someone you trusted instead of just picking up one of the thousands of cards you've gotten in your mailbox over the years (two reside in my box at this very moment) and calling some random stranger?

It's August, with so little happening that these are the kinds of things you think about...
Posted by Ed Ward at 3:57 PM 8 comments: