I guess someone's been reading this blog; immediately after I complained about the second-rate galleries springing up on Brunnenstr. just off Rosenthaler Platz, Nike got to work: 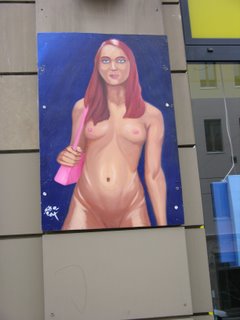 Thanks, Nike! And this makes a real nice contrast with the canary-yellow Statue of Liberty the travel-agency in the building to which this is affixed puts out on the sidewalk during opening hours, too. My only concern is that this painting is dated '04, like most of them are, and I'm wondering if there's any recent work. Still, the pink handbag and rather ambiguous nether regions are all part of that weird primitive Nike vibe, so long may she wave.

Long ago, I posted two paper graffiti naked lady wrestlers who appeared on a doorstop just a few buildings away from me, and I forgot to document how, in the middle of a particularly cold winter, one of them got warmed up with an "I [heart] NY" t-shirt. The same artist, though, appeared a few months ago just a block away, and I'd been meaning to shoot this funny piece for ages. Got it today while I set out for the Nike shoot, though: 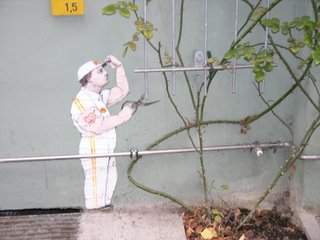 The name in the heart tattoo is in Russian, a language I simply can't read, but what the photo really fails to make plain is that he's only about nine inches tall and the rose bush he's standing by is over six feet tall. I like seeing him as I walk down Torstr., with his mixture of awe and determination as he gets ready to trim the giant rose.

Finally, the late, beloved Bistro Tor, the Döner Kebap place which stood for years outside my place, and which closed suddenly and permanently a couple of months ago, is slowly turning into something called Toco Rouge. There are Toco Rouge stickers all over the neighborhood, as well as on the bikes of the folks who are busily working inside. From the fact that they all look Thai or Vietnamese, and the fact that, in a rare moment when I could see inside, there were woks on the stove, I'm afraid we're in for another "Asia Food" place serving brown glop on glass-noodles. Gotta have glass-noodles: I was in a Japanese restaurant a couple of weeks back, and the meal began with a small glass-noodle salad, which would certainly have puzzled any Japanese person who ate there. Anyway, my expectations are nil for this place, and I'm wondering where I can get a decent Döner -- something I eat about once a month, if that often -- close enough so that in the cold weather it won't totally cool off before I get it home.
Posted by Ed Ward at 3:27 PM

Keep your eyes open. She puts these things everywhere!

I've magnified that photo 400 times and just CANNOT read what's written on the man's arm-band, so the mystery will have to remain a mystery. Unless I stagger past it one day.