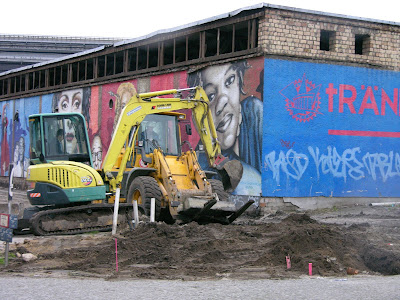 There it goes: another piece of Berlin history is biting the dust.


That's right, folks: by the time I get back from the States, the Tränenpalast will be no more. Apparently Deutsche Bahn has decided that this memory of the old East-West border has to be demolished immediately, the easier to excise the memory of what the building used to be.

I know for a lot of people, the Tränenpalast was a curiously-named entertainment venue, one which, if the experience my friend Gary Lucas had when he was booked there a few years ago is anything to go by, was horribly managed. In fact, practically from the day it opened in that incarnation, I heard sordid tales about the management, and the new managers didn't seem to be any better than the first ones. 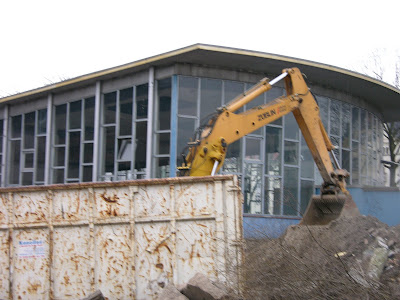 My first time there, though, wasn't exactly for entertainment. The building's name, "Palace of Tears," came from its use as the processing terminal for Western visitors leaving East Berlin on their way back home. In retrospect, this seems like an odd name: Friedrichstr. station was an international checkpoint (the other being Checkpoint Charlie, further down Friedrichstr.), not a German-German one (which were scattered all over town), so the story that it saw the tearful separation of families who had come over to visit doesn't hold water unless these families were from countries besides Germany.

When I made my first visit to East Berlin, it was in the company of a guy who apparently had raised some red flags at Checkpoint Charlie, and had suffered a cavity search on his last time over. He decided it might be easier to try Friedrichstr., and indeed it was, so my first view of East Berlin was the Admiralspalast theater. We quickly headed on to the Pergamon Museum, Alexanderplatz, and Frankfurter Allee, where we marvelled at the grandiose Russian-style apartment buildings.

But our ultimate destination was Prenzlauer Berg, where we met up with a guy named Norman. Norman was part of a group of vegetarians who met occasionally in East Berlin with some folks from the West, including some British and American soldiers, who were also vegetarians, for big dinners. Apparently (by which I mean maybe, see below), the day before, Norman had seen one of these guys on the street and waved to him. The morning of the day we met him, he'd been awoken by the Stasi secret police and interrogated for six hours. By the time we met up with him, Norman was a wreck.

Our solution to this was to get him as drunk as possible. This was also the solution to another problem: the 25 Marks one had to exchange one-for-one at the border. Eastmarks were worth nothing, and there was nothing much you could buy with them, but you weren't allowed to take any back with you, either. To burn them up, we bought Norman dinner and found a bar where we drank ourselves silly. Finally, it was almost midnight, the time by which we had to be out of East Berlin, and we were just about out of money. We slipped Norman our spare change, and headed to the checkpoint in the building which is now called the Tränenpalast. Norman was still traumatized by his treatment at the hands of the Stasi, and was begging us to find him a black Jewish woman to marry. "That way, if the state tries to keep us apart, I can charge them with racism and anti-Semitism!" We tried to explain that black Jews of any gender were thin on the ground, let alone ones who might be inclined to marry him, but he told us we were lying, covering up for our unwillingness to help him.

On the one hand, Norman was being ludicrous, but on the other, I never forgot this rather intimate view into life in East Berlin. The guy I went over with later published a rather icky book called Once Upon a Time in the East, detailing the wacky fun he and his friends had had travelling in the East Bloc before the Wall came down, eating bad -- but cheap! -- vegetarian food in places like Romania and Czechoslovakia and generally behaving like the boorish British tourists they were. Norman's story was in there, too, along with an interesting postscript. When the border to Hungary opened up, Norman was one of the first to leave East Berlin, and travelled the long way around, through Czechoslovakia, Austria, West Germany, and then back to West Berlin, a trip of hundreds of miles to achieve a journey from Prenzlauer Berg to Schöneberg. But once he was there, he began acting very strangely, and there are some among that circle who think, today, that Norman was a Stasi agent keeping track of them, and that it's not impossible that the whole interrogation story he told us that day had been made up.

I have no idea, but I do think of Norman, who was last heard of living with his mother back in Prenzlauer Berg, when I walk past the Tränenpalast.

Or, as with so many other things here, maybe I should put that in the past tense. Once again, an uncomfortable souvenir of Berlin's past is extirpated. In two years, no doubt, there'll be a little pocket park there (to compensate for the one on the other side of the station, on which rose yet another untenanted office building), or maybe a Tränenpalast Museum sponsored by Deutsche Bahn, where the story the exhibits tell might not jibe exactly with the memories a bunch of aging people seem to have of the reality. The Palast der Republik is pretty much down by now, the Tränenpalast is going down...What's next?

On Sunday, one of the tabloids had a headline screaming that Deutsche Post is going to tear down the Fernsehturm. It'll take a little more than the Berliner Kurier to convince me of this, but after what I've seen here, I'm not ruling it out, either.
Posted by Ed Ward at 3:26 PM

For once, this is one thing Deutsche Bahn can't be blamed for: instead the incompetents can be found somewhere in Berlin's government (I bet you were surprised to hear that). Can't recall the whole sordid story off the top of my head, but they sold the ground to a developer without realising parts of it weren't their to sell, and what they did sell was at a ridiculously low price, and they ended up dishing out millions in compensation to DB and / or the current owner, or something. And made a complete pig's ear of the Denkmalschutz to boot.

The TV tower should be safe as the structure is actually worth something (if only as a giant advertising pillar for Viagra).

Are you sure it's being pulled down? Never mind the Denkmalschutz, here's the Berliner Senat: I thought the trees were going and it (the Tränenpalast) would be boxed in by office blocks, and the Tränenpalast would become some kind of government-run Berlin Wall memorial-museum thing. That was the last thing I read (about 3 weeks ago, in the Berliner Zeitung) anyway.

Without trying to sound all Monty Python, when I was a lad, all around Bahnhof Friedrichstraße was just fields (I mean, the space where the Finnish Cultural Insitute, the Sparda-Bank, a Vietnamese Restaurant, Rossmann, Jokers, the Sparda-Bank...and offices; was a park).

where will our little gutter punk friends go? the ones that were usually to be found scaring the tourists at the traffic light? can't we get them protected as an endangered species?

See? This is why I do this blog; my readers are much smarter and better-informed than I am. Although, mind you, between mountpenguin, daggi, and the two people I talked to before I wrote that, we now have four variations on the story.

daggi's memory of the park on the south side of the station is absolutely correct (and I referred to it in the post: while the ground floor does indeed have those oh-so-necessary tenants, the upper floors seem to be, like so many other of Berlin's office buildings, pretty much deserted.

And so nice of William to be concerned about the social ecology of this situation, too. There should probably be a Gutter Punk Museum somewhere in Kreuzberg for them.

The GDR did have plans to build a shopping centre (aimed, presumably, at getting as much money out of western visitors as possible) on the site of that park, but the collapse of the state got rather in the way - so when it came to destroying urban green spaces on the Friedrichstraße the Stalinists were just as bad as the capitalists.

So Berlin gave back half the purchase price and added in some land free.

This article says planning permission for the new building has been granted under the condition that the Tränenpalast is not, in any way, knocked down, even accidentally.

As a side note, during the 20s there was a plan to erect a tower by Mies van der Rohe on the site.

@daggi: you had fields? Luxury. When I were a lad we had to grind our fields from bare rock using only our fingernails.

Talking of GDR shopping centres, try out the eerily empty Dreispitz-Passage a bit further up the Friedrichstraße.

I can't imagine the caberet in the Dreispitzpassage being very entertaining with that atmosphere around the place. Though: all it needs is an Irish Pub and you'd have a slightly more dowdy version of the Europa-Center.