Just when you thought every real estate bargain in Berlin was gone, up pops this one! 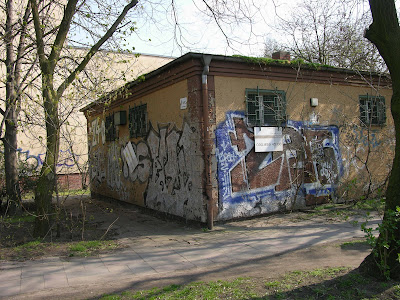 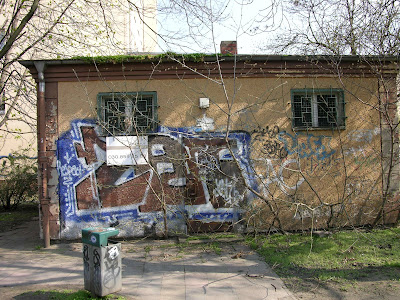 It's got a lot going for it. Location, for one: it's directly across Invalidenstr. from Nordbahnhof, which is twice as busy now that they have the tram line running. On one side of it, there's the historic Reichsbahn building, with its heroic statues of workers ready to build Germany's railroads, and on the other side, there's a nice park the locals use for sunbathing, with a kiddie pool that's jammed all summer long. So it's easy to get to and has nice green space.

Of course, the view's sort of hard to see, given that the windows are so high, but that's just a clue about the main thing it doesn't have going for it: if you look at the top photo, you'll see that there's a little sign high on the wall. It says WC.

That's right, folks: this is your opportunity to buy a genuine DDR public toilet.

It's been standing there, locked up and stinky, for as long as I've lived here. Not that that's stopped anyone; today as I shot this photo, I realized that the best sun was from the other side, and as I was headed in that direction, a gentleman from the building trades appeared, loosened his belt, and, um, proceeded to use the outside in the manner for which the inside was intended, if you catch my meaning here.

Maybe it's the jet-lag, but my normally rich creative faculties have frozen at the challenge of coming up with a use for this property, a reason to buy it. But I trust my dear readers will be able to think of something.
Posted by Ed Ward at 1:49 PM

Now, now, Mike, I'm feeling pretty good about Deutsche Bahn customer service these days. Turns out that somehow the ticket I booked back from Paris had me taking a Cologne-Berlin train that left an hour before the Paris-Cologne one got in. The guy at the DB service center decided it was the fault of the ticket office in Berlin and just stamped something on the back of the ticket. No reservation, of course, which meant standing up for the first 90 minutes of the trip, but no charge, either. Which is good, because if there had been I'd be camping out before the Köllner Dom right about now.

Could it make a largeish and cheapish 1-Zimmer Wohnung? My grown-up genes are telling me its time to buy my own place. My bank-account-aware genes are laughing all the way from the bank. Or maybe Brangelina have bought it. (OK, that was their last mention, I promise.)

"Could it make a largeish and cheapish 1-Zimmer Wohnung?" Absolutely. One sometimes sees so-called Remises for sale as stand-alone lofts which have exactly this appearance and dimensions; a typical one can be seen in the courtyard of Arkonplatz 1 (entrance on Wollinerstr.) The problem is the aquarium effect: with such free-standing units, exposed on all sides, you have no privacy. IMO it is unsuitable as an appartment; as a Büroloft, yes. Also, given its former use as a pissotière, the required gut renovation is not going to be "cheapish".