I'm grabbing a moment before I have to head in to the Austin Convention Center to interview Joe Boyd to jot down some of the stuff that's happened so far on this trip.

Paris was okay, although the restaurant I ate at wasn't worth noting (although it was inexpensive and not bad). The hotel was convenient to the Gare Montparnasse, which is where the buses to the airport leave from, and it occurred to me that Montparnasse is worth a walk when I have time. There was a nearby bar called Le Chien Qui Fume, whose neon smoking dog I'd have liked to get a picture of, although whether or not I have the skills to do this is quite another question.

I saw a number of election posters for Segolene Royale, the Socialist candidate (and, potentially, France's first woman president, although her chances don't look too good a the moment) with the slogan "A fairer France is a stronger France," and I mused that this is a slogan both stirring and, uh, empty. Think about it: what on earth does it meant?

The bus to the airport has a video loop it plays, presumably to distract you from the not-so-inspiring scenery after you leave the city limits, and, as on the other trips I've taken on it recently, there was a longish public service announcement about pedophilic sex tourism. A good cause, of course, but a strange thing to see over and over, the litany of how many years in foreign jails various men have gotten. Do a significant number of Air France's passengers to Charles de Gaulle Airport have sexual predation in mind at their destinations? That seemed to be the message.

Spotted on the way out of town, another Parisian eatery we won't be patronizing: Cheaper Food Sandwiches.

I haven't seen much music yet here, mostly because I've wanted to re-read Joe Boyd's book White Bicycles to prepare for this afternoon's interview. Jon Hardy (who was turned down yet again for a showcase here this year) recommended I see some of his friends from St. Louis who'd moved to New York, a band called the White Rabbits, and it was a good tip. They feature a very intense piano-playing guy, a more serene guitarist, and three other guys who move back and forth among bass, keyboards, percussion, and three drum sets. I didn't catch enough lyrics to see if the songwriting's there, and there's a bit of sameness to the material which ought to even out when they write more songs. I'd be very interested to see them in a year.

Last night, of course, there was no choice: I had to at least try to get into the Stax show at Antone's. Although the line went around the block, by some miracle I got in, and at long last got to see Booker T and the MGs, who are probably the greatest band-as-band America has produced. I mean this in kind of a jazz sense: the way the four original members, Booker T. Jones, Donald "Duck" Dunn, Steve Cropper, and Al Jackson, Jr. (who was murdered years ago: his place was taken by one of his cousins)(and yes, I know Lewis Steinberg was the original bassist), interacted almost telepathically and could raise material as bathetic as "More" and "Summertime" to astonishing heights. Forty years later, Cropper's let the guitar-hero thing go a little bit to his head (Steve! It was all about the minimalism of your playing!), Booker seems less invested in the results, and Dunn is still the greatest bass player around, but hey, what do you want after all this time? An hour of Booker T music was something worth waiting for.

William Bell has still got it, too, and his snazzy pinstripe suit, dark sunglasses, and soul-man show was way too brief. Hunger got me out of the building during Eddie Floyd's set. I know he's not as young as he once was, but this "clap your hands" schtick gets old fast. And I'd seen what I'd come for, and was glad.

And I was hungry. I've gotten some good food here, and will probably do a full post on it later, but so far the big discovery was just a couple blocks from my hotel. My friend Scoop, whom I hadn't seen in eons, has moved here, and he came in from his Rancho Deluxe in Bastrop County to have lunch with me. We headed for the Tâm Deli, the superb Vietnamese place Jean Caffeine turned me on to last year, only to find it closed Tuesdays, so we decided just to cruise until we found a taqueria. Buried in a strip-mini-mall, bundled with a convenience store, an auto insurance agency, and a pool hall, was Jefe's, which I picked because they also run a taco truck, which was parked out front. We had tacos al pastor, which is marinated pork, and the order came with two squeeze bottles of salsa, one kind of brick colored, the other a pale green. Both were astonishing, the red having citrus undertones and hellfire overtones, the green subtly fiery with a wonderful herb combination. Four tacos, $4.99. I'm going back. 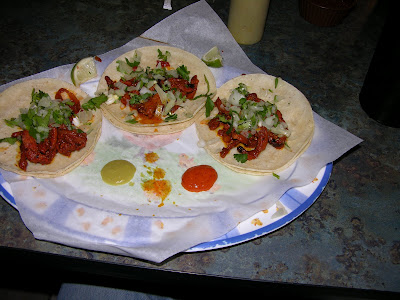 "A fairer France is a stronger France" may be smooth-sounding nonsense but it does translate into something like, "Vote for me and we won't have anymore race riots, like the ones that turned my opponent into an international figure."

Actually, Mike, that's what I was thinking it meant, but it was so cloaked in, er, politesse, that unaccustomed political spice for Americans, that it blindsided me, I guess.

And b, my Paris was a chain hotel and a not-so-good restaurant. But on the way back, I get most of a day there, and I'm going for a nicer hotel. And a better meal.

Just finished White Bicycles. Boyd produced SIXTEEN albums in 1970 (including one by Dr. Strangely Strange!), yet what stood out for me was all that he didn't do: his influence on Island Records wasn't as great as I had igured, he had almost nothing to do with Warner Brothers hippie movies of the early Seventies though he was in charge of the sooundtrack division (he did produce "Dueling Banjos", weirdly enough), and I really had no idea that the UFO club lasted less than a year. That's amazing, really, considering its influence. Still he did more in a year than I've done in a lifetime...