The other day, I made a hasty decision to leave the S-Bahn at the Wedding station due to an expired ticket, and figured that, since it was almost a nice day, I'd just walk home. Reaching the former East-West border, I was gratified to see that one of my favorite bits of unknown Berlin was still intact. The last time I was around it, the sidewalk was under construction, and I figured that, being unauthorized, this delightful installation was probably long gone.

But no. And since it's Easter weekend, I went back to shoot it today. 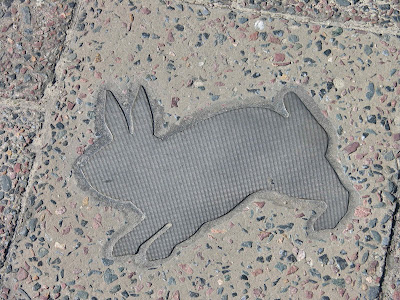 This little fellow is set in the pavement just beyond this familiar marker: 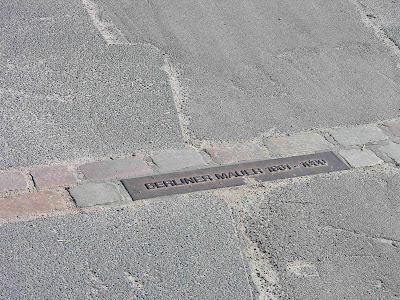 In fact, that's why he's there. He and his brothers and sisters decorate a swath of sidewalk where Chausseestr. meets Liesenstr. -- a pretty obscure corner of town occupied by not much: 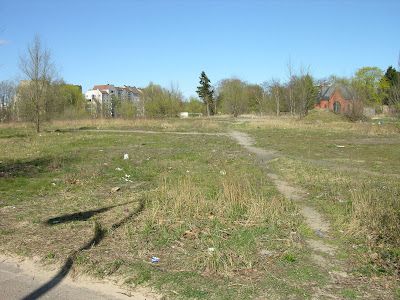 This patch of earth was a no-man's land. Now, as all Berliners know, and few outside of town do, there were two Walls. There was the big, thick one with the rounded bits stuck on top, and, some dozens of meters away, there was a thinner one with less fortification. Inbetween was no-man's land, with a path down its middle. This area was filled with all manner of impediments, with the aim of making an escape over the thin wall, across the bare area, and over the big wall to West Berlin, impossible. As we know, it was pretty effective, and it not only sealed Berliners out, but it sealed the no-man's land in.

And that's where the rabbits come in. I remember my first visit to Berlin in 1988, and climbing one of those observation towers at the edge of the Tiergarten, from which I could see the area which had once held Potsdamer Platz, the lonely scrap of a once-grand hotel the sole witness to what had stood there before the War. Inbetween, dust, rocks, scraggly shrubs and weeds, and rabbits. Lots of rabbits. 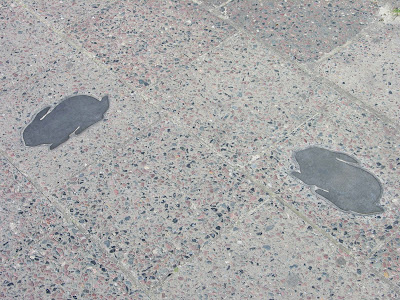 Given that I saw the Wall as a symbol of terror, as a structure which had added immeasurably to world tensions, as a (literally) concrete representation of the Communist Threat back then, it was unnerving to look over it and see...cute.

"Oh, yeah," said one of the friends who were showing me around, "they got in there somehow, and since there's nothing to threaten them, they, well, they did what rabbits do."

The Berlin Wall. And lots of rabbits. Apparently they were everywhere.

It's not that there were no threats, though. There were trip-wires attached to automatic firing devices. Hip hop hip trip, KABOOM. One less bunny. 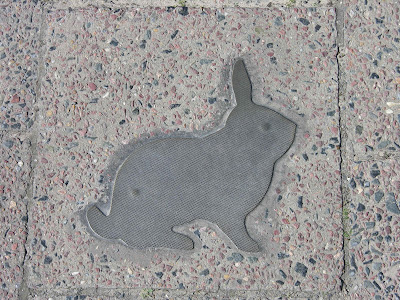 And what about the guard dogs who patrolled with the guards? They must not have had a lot of fun: if they caught a skinny East German trying to defect, they had to give him to the humans. And since Germans love dogs -- even the brutal youth who were conscripted for guard duty on this extremely unpopular assignment must have loved dogs, being German -- who could begrudge faithful Odin a rabbit now and again? 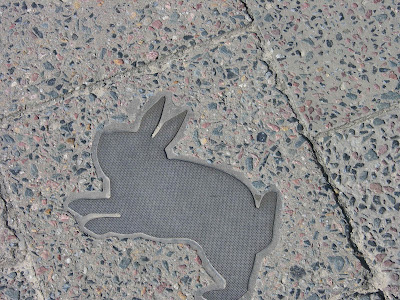 And that's how the rabbits got in the sidewalk. After discovering them for the first time, I mentioned them to a friend who told me that an artist -- an American woman, as I remember -- had installed them in memory of the rabbits who used to live between the Walls, and who, of course, vanished as soon as the Wall was dismantled. When I first saw them, they were a bright coppery color, but as you can see, they've tarnished. There's no signature, no tag, no nothing. Just rabbits. (And just today, this friend said she had no knowledge of the rabbits or the artist, so my information may not be correct, although it's what I remember from four or five years ago). I love that this group exists in a place almost nobody has any reason to visit, on the edge of a garbage-strewn lot, on the corner of a street nobody lives on.

Not that Liesenstr. is without interest: maybe nobody lives there, but there are a bunch of graveyards, one of which has a French chapel, a French war memorial for soldiers who died in defense of the "King of Paris," and the gravestone of Theodor Fontane. I once collected some big pieces of Wall in this graveyard, and still have them in storage in Texas.

And, at the end of Liesenstr., where it stops at Gartenstr., there are two rotten railroad bridges and, recently stripped of its protective coating of vegetation, a rather large remnant of the Wall: 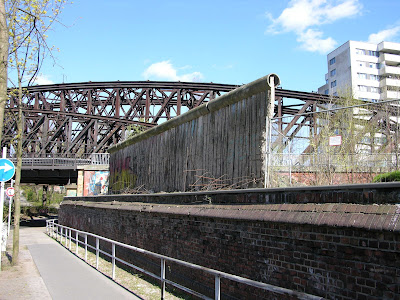 i had seen a few of those rabbits on Chausseestrasse bicycling back from work and wondered what they were all about! not sure if the one's i saw are still there as they were in close proximity to the new BND komplex and i doubt the spooks want any questionable kaninchen lurking beneath their feet....

I dug up my Easter bunny too – found it a while ago, but it seems appropriate now.

apparently there is a strange psychic forcefield which is always pulling rabbits, germans and communists into its gravitational sink....