Last Crumbs From The Trip

The highlight of my SXSW this year was getting to interview Joe Boyd, the legendary record producer, on-stage as part of the panels program. I do wish he'd read less from his book (hey, it was on sale right there in the Convention Center; whet the audience's appetite so they'll buy!) and given me more time to ask him about stuff that wasn't in the book (and about his next one, which'll cover his years as a world music pioneer), but it was an enjoyable time, and he mentioned that he'd be in San Francisco at the same time I was in Marin, so we agreed to hook up at Village Music, the great and soon-to-be-defunct record store.

Which we did, on Tuesday morning. Showing remarkable self-control, Joe only bought a small stack of records and arranged to have them shipped to his house in London. Then, in one of those remarkable coincidences that happen all the time at Village Music, in walked an old friend of his, the woman who'd given him the biggest hit of his career, Maria Muldaur! She scampered back to her house to get him an advance copy of her new record, and Joe and I went for some coffee at a nearby shop. She met us there, and I got to snap a pic: 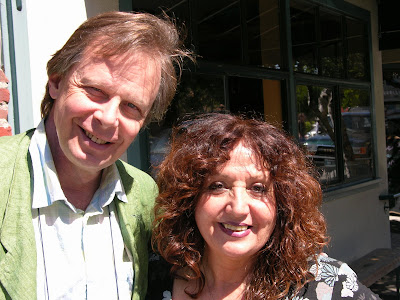 After we went our separate ways, I sped over to Berkeley to meet my friend Jaan for lunch at the remarkable Vik's Chaat Corner, a place I'd heard about but never gone to. It's basically a South Indian snack bar, and I was numbed into indecision by the choice. I finally settled on Bel Puri for myself, a dish I'd read about in countless Indian novels. 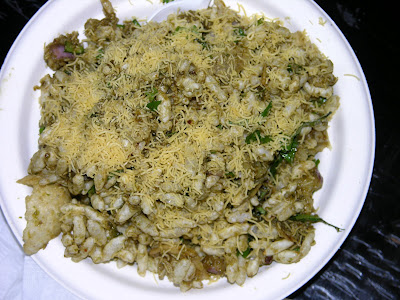 Described in the takeaway menu I picked up as "Crisp puffed rice mixed with onions, cilantro and potatoes with tamarind, mint, and garlic chutnies," it wasn't as exciting as it sounds, as perhaps the photo hints. Jaan, though, went for the Dahi Batata Puri, which rocked: 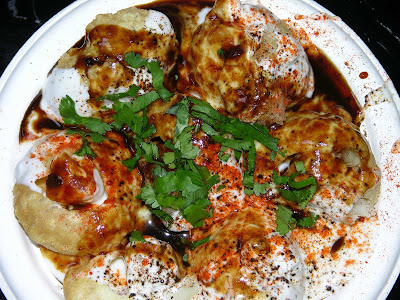 The description on the menu is "crisp puffed puris stuffed with potatoes and garbanzos covered with spices, yoghurt, and tamarind chutney," and it was one of those great South Indian things that balances a whole lot of different disparate elements perfectly. Afterwards, we hit the grocery store next door, and I marvelled at how much fresher the spices in there were than the ones at the Indian markets here. I also picked up a couple of those tiny Indian regional cookbooks (I'm a sucker for them, always have been) and once I decode them (ingredients often have Hindi names, but I'm getting better at them) I see some great meals in my future.

Probably the best discovery at SXSW was that Bobby Patterson, a legendary Dallas soul singer, is alive and performing. He was on the Ponderosa Stomp showcase, but went on at 1:30, which is too late for me, but the Stomp also had a day party on 6th St., so I made it over for that. The man is in top form, he had a great little band, and his between-song comments, delivered in rapid-fire surrealistic jive, made me want to hear his radio show. I managed to get a few performance shots, one of which even came out! 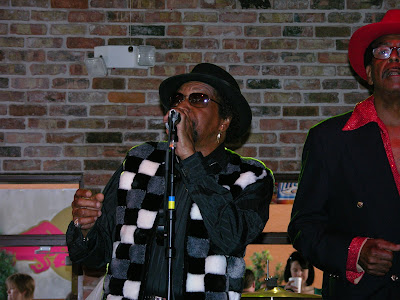 My old pal John T. Davis took two pix of me and Bobby afterwards, but I forgot to show him where the zoom button was, so I'll spare you those. It doesn't look, from the current Ponderosa listing, as if Patterson's playing this year's show, which is a shame, but I have to say, the lineup is, with the exception of the previously-unknown-to-me Jay Chevalier (a man with no discernable talent except for irritating the audience), absolutely incredible. If I were going to be in New Orleans on May 2 (and I'm not), I'd be there!

Another great singer and songwriter who won't be Stomping closed out SXSW for me: a rare performance by the enigmatic Swamp Dogg, who, I'm glad to say, is still in rare form. He's got a new album out, Resurrection, which I haven't listened to yet, but at least one of the songs, "They Crowned An Idiot King," is as angry as the Swamp Dogg of old. "It's 1970 and he's mad again," enthused Art Fein, who's been pushing the Swamp Dogg cause for years. I'll be doing a Fresh Air piece on him shortly. Swamp, I mean, not Art.

There were other highlights, musical, culinary, and social, and as always SXSW was overwhelming enough that I was glad for the week after so I could come down and do something else, even if that something else was an almost equally frantic trip to California. Everywhere I went, people asked me the same questions, so I felt like passing out a FAQ card:

* I thought you were moving to France. So did I; I'd anticipated selling my book proposal, but the woman who helped me develop it misrepresented herself as an agent. She wasn't, so I fired her. I'm now on my fifth agent, and he told me just before I left that he doesn't get it, either.

* So what's keeping you from moving? At the moment, €12,441.57, which, at today's Euro-Dollar exchange rate, is $16,569.65. That figure includes paying back debts, paying all my back rent, getting a new apartment in France, moving, and buying a new washing machine and couch.

* That doesn't seem like a whole lot. I hear you on Fresh Air. Don't you have any other work? Actually, no. Most editors no longer even answer queries. There's almost no work out there that I can see. That's why I'm trying to sell the book.

* Yeah, I know what you mean. I lost a lot of work this year, too. Thank heavens my wife has a job. Thank heavens you have a wife. With a job. Wouldn't mind having one of those myself.

Okay, it's Monday, New York's almost awake. Time to start moving that book forward again. One thing the past few days of being back here brought to my attention is that I don't want to be here any more. Thus, better start dealing with the cure.
Posted by Ed Ward at 1:48 PM

That bloke in the first photo, you sure he isn't Eberhard Diepgen?