Art In The Afternoon

So what's a guy to do after a day's apartment hunting has come up dry, he's a 30-minute walk from his hotel (and in no hurry to return to its barren location on a traffic circle in the middle of nowhere) and he's in the middle of downtown Montpellier? Go see art, of course.

It's not like there's a lot to see. Montpellier is a fairly crappy town for art. Of course, there's the ultra-deluxe, newly-reopened Musée Fabre, which is currently playing host to the Courbet show that the Met had recently played host to (before that was in Paris). I'm no Courbet fan, really, but the place is air-conditioned, and the show's gotten some ecstatic reviews, so I walked down there and paid the reasonable admission price. 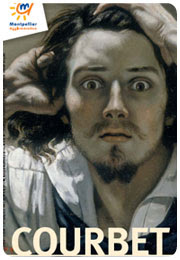 It's kind of too bad that this show's been promoted by the "crazy artist" self-portrait Courbet painted in his youth, since the whole story is a lot more complex than you'd gather from looking at it. Courbet, of course, was a great self-promoter, and this image plays right into his "tortured artist" schtick, even though for most of his life he was a great deal less tormented and more comfortable -- albeit fairly revolutionary -- and made a point of entering all the official competitions in Paris. Some of his subject matter was shocking for its realism, and a lot of his technique stretched the boundaries of what the Establishment of his day felt was acceptable, but my take on the body of work shown here is that he yo-yoed back and forth between shocking the old men and sucking up to them.

Of course, what was revolutionary in Courbet's day is hardly so today, but especially in his landscapes, I got the distinct feeling that he, like many other artists of his day, was groping towards Impressionism, which for obvious reasons -- the existence of an Academy, the fact that photography hadn't really been improved yet, the conservatism of collectors -- took a long time to happen. Stare at a seascape, something Courbet rendered masterfully, long enough and you're going to start going Impressionist, not to mention abstract, in your head. His paintings of woodlands, too, are just blurry enough around the edges to make you realize that he's playing with the textures color can make happen as much as he's "painting the woods."

But then there are things like his hunting paintings. It's not just revulsion at the subject matter that makes me dislike them -- hell, anyone who's seen as many German renderings of hunts as I have has gotten used to that by now -- but the fact that they must have been painted to appeal to the bourgeoisie. Who else would be interested? Who else would be so attracted to themes like The Nobility Of The Dying Stag or Nature Brought To Bay? Really, Gustave: nice technique, but the subject-matter is hardly as revolutionary as you make yourself out to be.

See, that's the maddening thing about Courbet: he was always proclaiming that he was totally overthrowing the world of art, but half the time he was backpedaling. Of course, the other half of the time he was, um, totally overthrowing the world of art. Painting nudes, for instance: not revolutionary. Painting two fat lesbians bathing in a river, on the other hand, would tend to bring the squares up short. Not to mention the famous Sleep, which is wonderfully composed, impeccably painted, and very, very explicit. 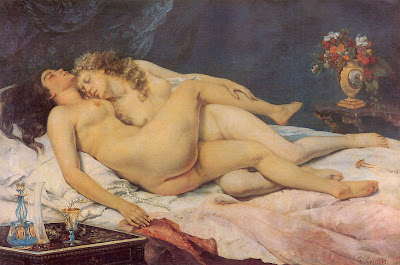 This is what made people crazy when it came to Courbet: he'd enter something like this in the Big Show in Paris and everyone would have to admit that boy, did he have technique and all, but eeek, the subject-matter! And we won't even discuss his famous Origin of the World, one of the most notorious paintings ever made, and also in this show.

(I note "also in this show" because two of his most important paintings, one of his studio, and another whose subject is a funeral, are not in the show, for some reason, having stayed home at the Louvre. It's a bit disconcerting to read and read about them in the captioning without at least being able to see a reproduction.)

Courbet's end is pretty sad, considering the flamboyant life he led for years. He got mixed up with the Paris Commune, and advocated the pulling-down of a military monument in Paris. It was probably just crazy-artist talk, but the Communards went and did it, and after their revolution was put down, the government went at Courbet to try to get him to pay close to a quarter-million francs for its restoration. He was imprisoned for a number of years, and completed one really great painting, The Trout in jail. His health never recovered, and he died broke.

I didn't anticipate seeing this show, so I didn't take notes. Please excuse the sketchy nature of the above (and below) as a result. In fact, I'd hoped to put it off until a friend who works at the Fabre came back from vacation and could sneak me in for free. But, as it turned out, the Courbet show, even for a Romantiphobe like myself, was worth paying for.

Thus, having seen it, and with more time on my hands, I decided to see the rest of the museum. Big mistake: who knew there could be that much bad art under one roof? Well, me for one: back in the days when I was roving cultural correspondent for this part of the world for the Wall Street Journal Europe, I'd make it a point to hit the art museum in any given city I was visiting after I'd done reporting what I'd gone to see -- which was often a show at said art museum. And folks, Europe is filled with culture and some of it is just plain awful. For every Gustave Courbet, there were 500 artists with skill and technique and absolutely no ideas at all. One of them was Fabre himself, who decided to remind Montpellier for all eternity that he'd lived there by erecting a museum to house his eye-glazingly dull paintings and those of his pals. This serves as the core, and the guide to acquiring new paintings, for the current museum. You have been warned.

Since the Festival du Radio France was (and still is) going on there, the Fabre has a short-time exhibition of Stradivarius instruments, violins, violas, and cellos only (no guitars -- and he made plenty). And although there were publicity materials for this at the Tourist Office, there wasn't a single sign anywhere in the museum indicating where these were on display. None. I finally asked a guard.

And while we're on the subject of stuff that doesn't work in the Fabre, two more things. Although the Courbet show had played the Met, the English captions are extremely truncated, and don't give nearly the amount of information the French ones do. It seems to me that there must've been ready-made captions available: why not use them? The other thing is ongoing: during the course of my visit, I used a men's room. When I entered, the light was on. As it should be, right? Well, it didn't stay on long, and the room, windowless, was utterly black. I finally managed to bang against the door-handle in my blindness, and the light went back on. That's the switch. You might like to remember that. Also, after I washed my hands, I realized there were no towels. Nor is this an anomaly: walking around with wet hands, I found another men's room. No towels in that, either. Nor are there any of those stupid air-blowers. Nothing. Weird.

On my first night in town, Miss Expatria reminded me that there was a show of 240 photographs by Weegee for free at the Pavillion Populaire, which is sort of across the street from the Fabre, and on another afternoon of frustration, I decided to see it. In fact, I realized as I walked in, I'd never really seen any of Weegee's work in bulk, just a few gallery shows at a Berlin gallery which represents his estate. Those shows tended to be thematic, and this was more general.

That said, it was thematically organized: the show opens, oddly enough, with images of sleep -- often drunken sleep, since Weegee loved the Bowery. I kept thinking there must be another way to organize this material that's not so damn linear, but haven't come up with one yet. Still, by the second or third room I'd surrendered to Usher H. Fellig's vision (no wonder he called himself Weegee). It's hard not to: just looking at one of his shots is a confrontation. What he's making you look at often isn't pretty, but it's Right! There! in your face. Looking away isn't an option: it'd be a violation of your contract with the photo. And, whether or not what you're seeing is "the truth," you're sure as hell looking at what he wants you to see. Some of it -- the shots of couples making out in movie theaters, done with infrared film -- verges on stalking. Verges, hell: it is stalking. And most of his subjects are stripped naked, even the nudes, who glare at you as if saying "This is me. So what?" There's an erotic frisson, but it dissipates pretty quickly.

Again, I didn't take notes, but one thing really struck me: the captions to each set were as dumb as could be. Only someone who had never set foot in the United States could have written them (they're all in French, if that helps). And in some cases, they're so ignorant that it hurts: there are numerous shots taken at Sammy's, a cabaret on the Bowery that was big with the upper crust who went slumming, with entertainers and characters galore. The caption notes that after Sammy's closed, it was a long time before entertainment returned to the Bowery with the opening of CBGBs, which, it says, featured Bob Dylan, Joan Baez, Pete Seeger, and Woody Guthrie. Uh... And the simple captions on the pictures themselves are also suspect: in a series on strippers, there's one of a few girls with op-art designs painted on their bodies standing in front of a rock band with Fender guitars. This is labelled as being from the late 1940s. So late, I'd say, that it was at least 20 years into the late 1940s.

None of this, of course, distracts from the images themselves, and the show's up until September 14. If you're in town, go. It's one of the art bargains of the summer.

The Musee Fab, as I like to call it, is the worst hung collection of art I have ever seen. You have to be a yoga expert to contort yourself to the point where there is no glare. I do love their Dutch portraits, though.

Speaking of exhibitions, Ed, will you report on the Babylon extravaganza currently on show? That one should should make you happy: although the show played Paris and London, it isn't simply a resucée of these two, as the Berlin version has by far the most artifacts!

Didn't occur to me, but now that you mention it, it is air-conditioned, isn't it?

But of course Berlin's show would be the best-stocked: the Germans took huge hunks -- immovable hunks -- of Babylon.