The Emigrant At Rest

So on my last day in Montpellier, to quell the unpleasant feeling that I hadn't really accomplished anything when, in fact, I knew I'd accomplished a great deal even though I still didn't have an apartment in hand, I went for a walk over where I'd been the day before -- only this time I took my camera.

I am the world's worst photographer, not only in the quality of my output -- with the rise of ubiquitous digital photography, I'm even willing to cede the crown of worst creator of photographs to someone else -- but because I just never remember to pack a camera when I go to potentially picturesque places. Partially this is because I have a large, clunky, but superb Nikon which isn't as sleek and inconspicuous as one of those thin, silvery little things. But that's not really the excuse; I've done this for years, packed a camera and never, or almost never, used it.

But since Thursday I'd spent some time wandering around the hilly parts near the University and the Cathedral, I decided to go back and actually shoot something. 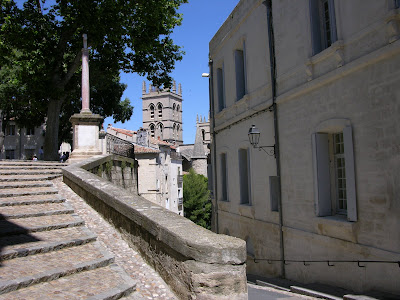 This shows the Cathedral (St. Pierre, for those of you keeping score) sort of framed by some other buildings, as seen from a small park where people were sitting in the very warm noonday sun. 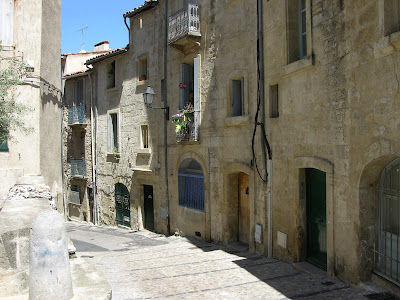 This is one of those side-streets between the Cathedral, the law school, and the rue de l'Université, just naturally picturesque enough that it's a point-and-shoot situation. 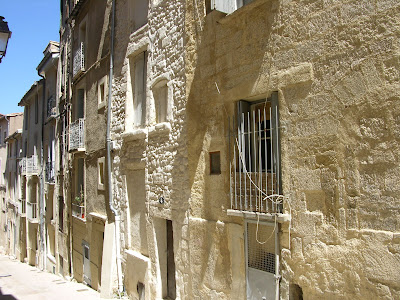 Another one, or part of the same one, I can't remember. 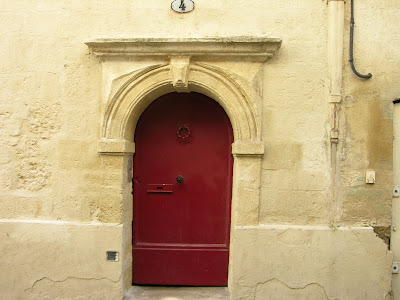 One of the doors leading to one of the old houses in that neighborhood. 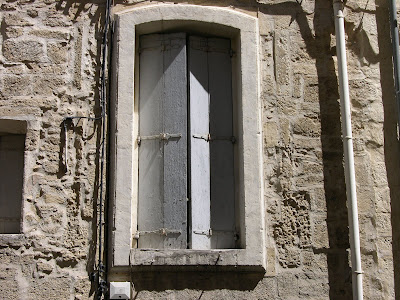 And the shutter-style air-conditioning they've used for centuries.

I should say, though, that romanticizing these pictures isn't wise. The neighborhood is mostly quite poor, and, I'm told, dangerous at night. It was hot enough that windows and doors were open as I passed, and I saw large families inhabiting very small spaces, heard kids being spanked, and lots of loud televisions going. I'm sure that a micro-knowledge of the area would show that there are, indeed, students and artists living in some blocks, but there is definitely a funk going on there that might not make it an ideal location.

But I'm doing no planning for a day or two anyway. I have a big deadline at the end of this week, and I've got to put the pedal to the metal for it. This learning experience was costly, and although I haven't touched my lease-getting-and-moving nut, the bank account did take a hit. Next time I have to be far more efficient, strike and score, then come back and gather whatever houeshold necessities I can fit into a couple of suitcases, come back to the efficiency I've rented, and make it happen.

And happen it will. I know that now. And that is such a good feeling.

My thanks, incidentally, to Bart, Andy, Sam, Nick, Claude (in absentia), Etienne, Lou, Hannah, Peter, Dom, and the fine folks at ther Hotel des Arceaux, who did so much to help out.