There is a tiresome meme, particularly in America, that goes "scratch a German and you'll find a nazi." Get one of these people worked up enough, the thought seems to be, and the inner authoritarian antisemite with delusions of world conquest comes out. Nobody who's lived here for more than ten minutes, let alone anyone who's ever actually met a real live German believes this, of course, but it persists.

No, the real meme is "scratch a German and you'll find an animistic pagan."

The early Christian missionaries must have really had a hard job in these lands, because they never really succeeded, in my opinion. Could the ancient Germanic nature-religion really have been wiped out when 2008 years after the birth of Christ nobody thinks twice about naming a child "wolf-path?" (Well, what did you think Wolfgang means?)

This is why, when German cinema first started making Westerns, it went straight to Karl May, the German writer who never left Europe and ground out pulp novels about the Old West which centered on the Indians. German Westerns weren't ahistorical: the Indians always lost, but they were also clearly the tragic heroes. They lived in close harmony with nature, and revered it. Why, they were almost Germans!

It's why Germans have those little settlements of garden houses everywhere there's enough space to wedge them in, and it's why they go mushroom hunting at the crack of dawn on weekends in the fall. It's why, when they go to America, they head to the National Parks, drive down Route 66, or groove on the Arizona desert. It's why they number the trees in their parks and forests (and really, if you don't believe me, go look: there'll be a little tag there somewhere, placed in the name of Ordnung).

And it's why my street is about to erupt into a seething cauldron of civil disobedience. Or not. 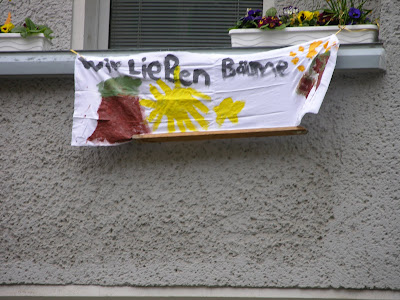 Early last week, some official-looking papers were taped to the doors of our buildings informing us that tomorrow, Monday April 21, city workers would fell most of the trees on our street and some adjoining ones. The trees in question were black cherry trees, and had, according to a Herr Doktor at the Berlin Environment Office, developed a root syndrome which might result in their falling over and hurting cars parked beneath them. The reaction was swift: more signs appeared, taped to the trees in question. One of them had word from yet another Herr Doktor questioning the accuracy of the first Herr Doktor's report. All of them noted one truly unfortunate detail: the city didn't have funds to replace the trees being felled.

In a repeat of something I've seen a lot before, signs resembling funeral notices appeared on the condemned trees, with a big black cross. "CONDEMNED TO DEATH" read a huge headline. A more reasonable sign in green then went up, calling for a mass demonstration. "The report of the root damage to the black cherry trees is doubtful," it says. "Not all the marked trees must be taken down. There is no money to replace them." 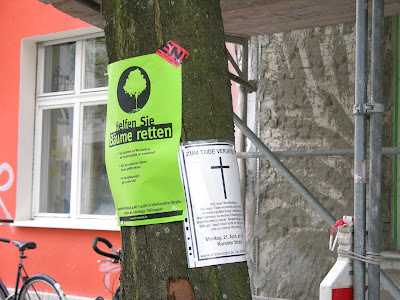 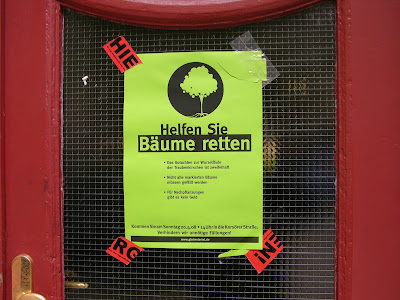 Then some red and white striped tape was stretched between the trees to be felled, along with no-parking signs effective at 7am on Monday. Sometime last night it vanished.

Today at 2pm, a demonstration was scheduled. About 30 minutes into it, I went to check it out. A merry old chap with a beard was pounding black wooden crosses into the patches of ground where the condemned trees were standing, as a television crew documented it. A pair of grim young men unfurled a huge sign that said "FIRST THE TREES...THEN THE PEOPLE!!" and just as quickly unfurled it after they'd gotten some attention. There was a table set up, at which signatures were being collected, and some guy walked down the street sticking copies of the mock-obit flyers under people's windshield wipers. The center of attention seemed to be another old guy with one of those contraptions of stick and string which make gigantic soap bubbles, and clusters of young parents stood around with their kids and chatted. A couple of bored cops checked every car coming into the street and otherwise stood around.

Will any of this cause the city to reconsider or put off the date of the trees' doom? Can demonstrating on a Sunday, when you'd better believe any relevant office is closed, do any good? Will this end up like every other instance like it I've ever seen in Berlin, with officials nodding their heads in sympathy and going ahead and doing what they'd intended to do anyway? And...are these trees really such a menace to automobiles and real estate? I don't know.

One thing I do know: it's not smart to mess with trees in Germany. It really does seem to call forth an atavistic response from people, as if the tree spirits had spoken to them and reminded them of the symbiosis that binds the Volk to the Bäume.

Another thing I know is that I've never yet seen the city of Berlin dissuaded from doing anything, no matter how stupid, once it had made up its mind to do it. 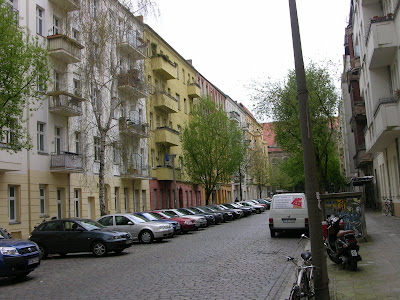 (The doomed eight, above, in green).

UPDATE: Went out at 1pm on Monday, all trees gone. A new, badly-painted sign declated it a SAW-MASSACRE!!
Posted by Ed Ward at 1:56 PM

Actually the Nazi regime was pretty big on animistic paganism (think, e.g., of the Ahnenerbe of even merely of the adoption of the Swastika), so that is not strictly incompatible ;-)

So they're only gonna chainsaw the trees that are alive, and that dead-looking silverbirch (?) can stay to damage cars another day?

This looks like it could be fun. Tomorrow at 7am - if I can force myself to get up early, I'll be there (to watch, and be amused; not to become a tree-hugger).

The silver birch (for it is that) is part of the Russian soul, and the Russians were once an integral part of this particular block, if only vicariously.

Let me know what happens at 7 -- but later than 7, thanks -- if you make it down. I just hope it doesn't make too much noise.

Did you miss the hystrionics last year with the trees along the Landwehkanal in Kreuzberg? They were going to cut down every last one because they were threatening the integrity of the canal walls.

The massive protest saved a huge number of the trees and forced the SCHIFFAHRTSAMT or whatever to hire divers to check out every single tree before they could raze one.

Also, this black cherry tree battle in your neighborhood goes back about a year and similar outrage delayed the whole thing. The problem, as I understand it, is that the trees need deeper roots than urban planting will allow so they are in danger of tipping over.

But I'll never understand the complete hysteria over trees. We all chose to live in a concrete jungle. It's a bit disengenuous to demand a leafy surrounding.

first the trees, then the people? can't we just cut to the chase and get rid of the people (and their cars)? then it wouldn't be a problem if the occasional black cherry toppled over...

I'm looking forward to the rest of the story.

I think the business in Kreuzberg was perfectly reasonable, especially as the detailed investigations showed that most of the trees weren't damaging the canal walls at all, and cutbacks in renovation/etc. had caused most of the damage to the walls, not the trees.

Of course, I don't live in Kreuzberg, so I can't judge what the protesters were like - but I suspect the percentage of rich yuppies with children in designer clothes in retro 1970s pushchairs was lower than in Ed's part of Prenzlauer Berg, which automatically means I have more sympathy with the Kreuzberger.

I wasn't there, incidentally, Ed - as anything happened yet? Anyone chaining themselves to a trunk? I doubt it - this protest is probably more about flat prices than anything else; while the value of an "investment" is important, I can't imagine that any of the protagonists find it that important.

No chance of a Swampy turning up in Prenzlauer Berg (google it along with site:uk) then.

As you can see from the update I just posted, the trees are gone. More are due to be removed from Ystader Str. in a couple of days.

Anon, yeah, I do remember that canal hoo-haw last year, now that you mention it. I must say, though, that the deployment of divers did do its bit for unemployment. But I also know that a good strong wind means not only trees, but large branches can come crashing down on autos, and those branches can cause just as much damage, so ultimately you can only be safe by parking where the trees ain't.

I also don't agree about "agreeing to live in a concrete jungle." Berlin, believe it or not, has more green space per cubic kilometer than any other city in Europe, which is one of the things which appeals to people. Even cities without huge forests in the city limits have tree-shaded streets. Hell, even New York has tree-shaded streets. Given a choice, nobody chooses the concrete jungle. That's just absurd urban romanticism run amok.

cut the trees to save the cars just don't wash wid me these days.... And if the cherry trees need to grow deeper roots than why not replant them. I know, I know money...which is all being spent on making sure one child families with two cars have enough parking places. On Kollwitz Platz the Verkehrberühigte Zone which was supposed to stop traffic from driving through was so heavily protested by the Yuppies because of 12 parking places and they won and saved their precious parking places! Now it's a bigger sidewalk which helps but it would have been much cooler if it was really no cars at all.Huge contrast to those who lived here in the 80s and saved streets like Oderberger from being "modernized" with Neubaus.

Hallo! Found your blog via the charming Bowleserised, whose writing always makes me drift into daydreams about my alternative life in which I live in Berlin and every weekend get on the train to visit my mommy for a piece of Kuchen. That is not called a Kuchen, because my mommy lives four hours train ride east of Berlin, in Poland. Apologies for the lengthy introduction.

As for animism, I wonder whether it's not a Central European feature. Poland is not yet as wonderfully Öko as Germany, but when I was little, we celebrated pagan Midsummer at Lednogóra and the recent Rospuda valley controversy gives me faith that the pagan/Öko/tree-and-beaver-hugging spirit is not yet dead.

But then, what about the Celts? Are corporations a plot of nasty aliens to take over Earth in spite of our best human chthonic and telluric endeavors?

I also don't agree about "agreeing to live in a concrete jungle." [...] That's just absurd urban romanticism run amok. Thanks, Ed, for writing that: my sentiment exactly.

Generally speaking, I don't understand the vicious hostility evinced by many posters towards any sign that civil society here still has a pulse and has not yet flatlined. What's your beef with it exactly, if I may ask?

I'd have thought it meant "wolf gait" rather than "wolf path", a bloody-minded wolf picking his way through the impenetrable Germanic Forest, as it were, where incidentally so many Roman legions were systematically wiped out by the -indeed pagan- locals...

Then again, German's not my native language and neither am I a fully qualified "Germanist".