In The Good Old Crumb-er Time

You can tell it's summer in Berlin because when it rains you feel disappointed instead of resigned. The wet seems to be related to a distraction of the Gulf Stream which is related to climate change, but more technical than that I can't get.

Still, you have to wonder how the rain affects Sandsation, the latest tourist attraction by the Hauptbahnhof, where a visiting Texan dragged me the other day. Massive sand sculptures by actual artists (some of whom appear to be professional carvers of ice, snow, and sand) are being made out of 2000 tons of the stuff dumped on the site, piled high, and carefully scraped into images. None of them are going to give Richard Serra sleepless nights, but it's an amusing thing to walk around.

There are sculptors from all over, including a guy from India who heads a sand-sculpting school there and is recreating the Taj Mahal in ridiculously authentic detail. The theme is "Welcome to Paradise," and sure enough, one of the Germans has sculpted an anti-paradise of miserable heads of boat people crammed into a tiny boat. Never enough misery, eh?

Most of the sculptors seemed to be spritzing their creations with some sort of stuff from an applicator that looked like the ones exterminators use. Maybe that's rain-protection, or maybe they're just resigned to re-doing their work from now until July 29, when the thing closes.

And inside the Hauptbahnhof, the Diplodocus skeleton has vanished, replaced by an information stand about the various (costly) wireless services German train stations are now offering.

On the rest of our walk, the Texan and I walked down Reinhardtstr., better known as Little Bonn, where I like to show people the Nazi air-raid bunker that continues to stand there because the price of demolishing it exceeds the value of the plot on which it stands. For some months, a luxury apartment has been under construction on the top of it, making me wonder who in the hell would want to live atop an ugly concrete hunk which is cold and damp inside. I got my answer last week in an article in the International Herald Tribune, informing me that an art collector named Christian Boros is moving into the apartment and housing his collection, which will be open to the public, in the bunker. I've been in this bunker, not when it was a gabba club, but afterwards when the irrepressible Hannes from the DNA gallery mounted a show in it a couple of years back. All I can say is, I hope Boros has some interesting stuff there, because this is one depressing interior.

Hope, however, springs eternal, etc: Best Western has just opened a hotel next door. That means guests have their choice of a view of the bunker or the Ukranian Embassy next door.

While we Berlin expats are seeking hamburgers now that Hazelwood seems to have gone the way of all good restaurants here, New Yorkers are warming to Currywurst. Really: a friend who works at the New York Times has declared it good, and just look at the rest of the menu: 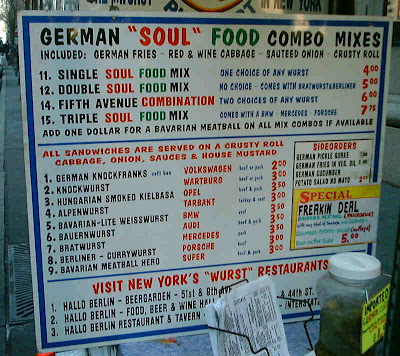 The prices are even right. Not that I think I'll be visiting New York any time soon, and if I do that I'll be seeking out Currywurst, but I give these folks an A for effort.

Living alongside a straightaway on which speeding idiots race day and night, and given that Berlin drivers are hands down the worst I've ever come across (and yes, I've driven in Italy), I'm amused by the current anti-speeding campaign someone's mounted. I looked for images on the Web, but there don't seem to be any. At any rate, this features gorgeous women with their finger and thumb indicating a distance of about an inch, and the caption "Speeders are about this big." I know, Sigmund Freud was Austrian, but someone here has hit upon something I've suspected for a long time.

I can tell the way this week's going: today I took my last €40 out of the bank, hoping that one of the several firms I've worked for recently will be paying me soon, and went down to the market at Hackescher Markt. Standing waiting to cross at Rosenthaler Platz, a driver changed lanes so he could drive through a puddle and douse me head to foot. Undaunted, I pressed on, bought some Parmesan from the pasta ladies, bought some olives from a "Greek" stand, and headed home, at which point I realized that my wet hand had apparently stuck on a €10 note, and a quarter of my bounty was gone.

That's okay. It's going to rain all weekend anyway.
Posted by Ed Ward at 3:13 PM

earlier i was also musing over the fate of the sandstation artists in the rain...though not enough to actually visit...i would like to imagine them standing around, heads hanging dejectedly as they watch their sandy paradises slump then collapse, dissolving into formless mounds of crushed hopes.

Wow, you're almost as cheerful as I am!

"The theme is "Welcome to Paradise," and sure enough, one of the Germans has sculpted an anti-paradise..."

haha, that cracked me up.

what is up with hamburgers around here? there's one burger place near me whose burgers WOULD be very good -- proper toasted buns, fresh crisp lettuce and tomato, cheese, bacon, barbecue sauce available -- EXCEPT the meat is obviously-frozen patties which are tough as leather. How can they pay such attention to everything except the most important ingredient?

Sean, clearly you don't know about the relationship between Germans and ground beef, a foodstuff they fear. Really: ask your German friends if they'll eat pure ground beef, unadulterated by ground pork.

The frozen patties are all supplied by the same wholesaler; very few, if any places (besides The Bird) use anything else. Frozen patties are safe! They're mass-produced! And, since few Germans know how a hamburger's supposed to taste in the first place, what do they care?

Eating a hamburger is actually more a bit of cultural signifying than it is nutrition. Early on, you could only get them in theme restaurants like Jimmy's Diner, which was always packed late at night with German rockabilly kids and German hipsters -- all Americanophiles who were gingerly trying on an American experience they didn't really expect to like much.

And ever try to get crisp bacon on a bacon-burger?

Not to mention the fact that the "hamburger buns" in most of these places fall apart immediately, a sad situation given the high quality of most German baking.

ed, would you know the location of that imbiss in NYC featured in the photo? i'm headed there next week for a couple of days and would like to try the NYC take on currywurst instead of the usual slice of pizza or sabrett rat-dogs for my walkabout meals

An amazing feature of this blog is that each photo can be clicked on and seen in actual size. If you look at the bottom of the menu, three sit-down locations are listed, one clearly enough to read. Also, as a clue, the guy who ate the Currywurst works at the New York Times and hinted that the pushcart was near his office.

I found the hamburgers at Catherine's (in Dussman's bookstore on Friedrichstrasse) to be good. But again, it's been years since I've been there.

Catherine's is long gone, Christina. You're the only person I know who's ever been there: they did a lousy job of publicity, and their hours were weird. Plus, the location was terrible. Too bad I didn't know about the burgers, but gone is gone.

Well that sucks. Except for their milkshakes being the standard German shaken milk, the food was good - not that shaken milk is bad, just not what one expects. Strange, they were usually pretty full. They even had great apple pie.