First off, the reaction to my last post was very interesting: I got an e-mail from David Kamp, the author of The United States of Arugula, thanking me for the "review," and noting that, as he mentions in the book's introduction, there were threads of the story which he just couldn't wedge in to the narrative as he was telling it. As an example -- also mentioned in the introduction -- he cites the history of Chinese cooking in America, which isn't mentioned at all.

He's right: once you start a story, it goes where it wants to go, and if it's going to be readable, you have to make sure there aren't too many digressions. And, as Kamp said in his note, both Edna Lewis and John Thorne lie outside the narrative he was writing. (He also noted that he'd eaten at Gage & Tollner under Lewis' regime, but, unlike me, his table had gotten a visit from the grand lady herself, checking up on things. I am officially jealous.) As for Raymond Sokolov, he tried to get an interview with him, but they kept missing each other. This kind of thing happens, too.

As for me, I told him that this piece, like pretty much every post on this blog, was written and edited in an hour or less, which is a discipline I maintain in case I ever wind up with a serious writing career again. And in my case, I left out one of the threads of my argument, which was why I'd mentioned Bill Bruford's book Heat at the top of the post: that besides the Food Network honky-tonk I mentioned, the other current trend seems to be towards a kind of connoisseurship that takes the ability to make good food out of the hands of ordinary people, be it through the kind of perfectionism Mario Battali practices, or the sous-vide fad or the weirdo-cuisine trend of El Bulli and so on.

Finally, Kamp mentioned that he was familiar with my writing, because of what he called "a morbid affliction of mine".

Not as morbid, of course, as this news about a German Chinese restaurant. It's pretty obvious -- well, pretty obvious to those of us who grew up around organized crime, anyway -- that some of the "Asia" restaurant phenomenon here is about more than the bad food they serve. One guy I knew said it was an immigration scam: since Germans can't tell one Asian from another, successive waves of workers pass through the restaurants using the same set of ID cards.

It's obvious that something's going on a lot of the time: people who remember the original White Trash Fast Food club on the corner by my house probably wondered why the Chinese motif, but that was because it was the Kaiser des Chinas restaurant before that, ornately decorated, with room after empty room. You never saw anyone in there, and the one person I knew who'd eaten there asked me if I had. When I told him no, he just said "Don't." (And he was German).

And then, one day, it just closed. It sat there, empty, for over a year. When Wally and his crew took it over, he showed me the kitchen. "These people left so quickly that they left the spices still measured out," he said, pointing at a row of porcelain bowls with various powders and shriveled remnants in them. That was when I remembered having found a bunch of waiter's wallets in the trash outside my house and wondering how in the world they'd gotten there. Still, nothing like this has happened here yet.

Following up on the last set of crumbs, it should be noted that the good voters of Berlin actually went for the renaming of a stretch of Kochstr. as Rudi-Dutschke-Str. a couple of weeks ago. Sometimes the good guys do win, even if it's just a bit of harmless symbolism.

And following up on another crumb, I want to report that the Yum Mee bánh mi sandwich joint up at the top of Friedrichstr. is doing a pretty good job. I think the baguettes could be crisper, and they use some kind of margarine instead of the homemade mayo the place I was introduced to them in Honolulu used, and of course they don't use shredded green chiles because they're scared of frightening the Germans. Turned out the guy who actually puts your sandwich together speaks pretty accent-less American English, although he's apparently never been there, and he interrogated me pretty thoroughly last time I was in there about my opinions on his product and my experiences with bánh mi in America. I told him he should add Vietnamese paté to the menu, but he wasn't sure Germans would go for it -- and he may be right. He is, however, about to add tiger prawns to the bánh mi side of the menu, which should be good. And, as lagniappe, as they say in Louisiana, his co-worker taught me how to say pho correctly. I'd been saying something like "phaw," but it turns out to be more like "pheu." Now if someone here would learn how to make that right...

I recently discovered that there are so many refugees from Brooklyn's hipster enclave, Williamsburg, here in Friedrichshain that they're calling it Friedrichsburg, but that is not why Deutsche Post issued this stamp this year. Really. 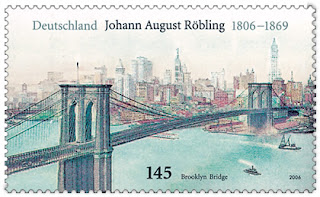 Weird, my Vietnamese college roommates pronounced it more like "fuuuh". I miss living with them. The food was awesome. With so many Vietnamese in Germany, you'd think they'd be more Vietnamese restaurants.

And you know what? I think they were right. I looked it up in Wikipedia because I was wondering if I'd get the diacritical on the 'o' right, only to discover it was a diacritical I have no idea how to make, sort of a little dot on one side of the letter. But your roommates' pronounciation was the one they preferred, too.

As for why there aren't more Vietnamese restaurants here, it's because any restaurant which doesn't cater to the preconceived German idea of what the food is like -- no matter how erroneous that idea may be -- will be shunned. Also: flavor isn't particularly welcome here, either.

Yeah, you're right. It's very depressing... Back in northern Virginia there are phô restaurants in every shopping center. Haha, that reminds me, we took Rainer's 14 yr old German niece to a Vietnamese restaurant in noVA with hanging ducks and a roasted pig sitting on the counter. She was horrified and refused to eat anything (even fried noodles)!