Tamales in Berlin? Impossible. Well, not entirely. There was a Mexican woman who showed up at the first Karneval der Kulturen and handed out tamales to promote her new tamale-making business, and dissolved in tears after the Germans first accepted them, then threw them in the street because they couldn't bite through the corn-husks. Never occurred to them to unwrap them, I guess. But -- wise woman that she was -- she soon gave up the business.

Late last summer, though, a friend from Texas announced he was coming over, and I asked him if he could bring some stuff over for me, including some cornmeal. Instead of cornmeal, I got a four-pound sack of masa harina, the treated cornmeal you make tortillas from. Oops! But when I mentioned this to RFM, he mentioned he was going to California and could pick up some corn husks and any other stuff I might need to make tamales with. Just the ticket! He dutifully bought a few thousand of them, and I researched a recipe, coming upon this one, which, with some tweaking, looked like it would do the trick.

Finding a time and a place that was convenient to all took a bit of doing, but on Sunday, he, his friend Kristen, and I showed up at the dancer's place (she's got the only kitchen big enough to do this) and got down to some serious tamale making. Actually, I showed up first to get five pounds of pork roast and two chickens boiling and returned some hours later to find them boiled and cooled off. I proceeded to shred nearly the whole meat-mountain by hand, which was essential; as we discovered, the strings of meat are like shreds of tobacco to be rolled into a tamale/cigarette.

Next, I heated the meat-seasoning paste on the stove and cooled it some. By this time Mike and Kristen had showed up, and it was time to get to work. First, Mike kneaded the spice-paste into the meat: 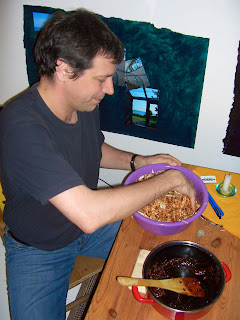 Next, I stirred more spices into the dry masa, added some oil, and then we whisked in the broth with an electric mixer. All this while, the corn husks had been soaking in the sink, so we were ready to go. Here's the wet fixins: 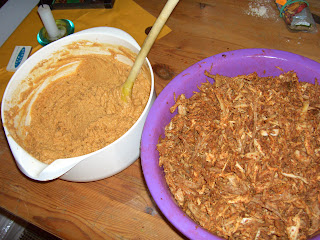 Learning not to overfill them, learning to roll them correctly, and learning to fold them carefully wasn't easy, as you can see from the wide variety of shapes they wound up in: 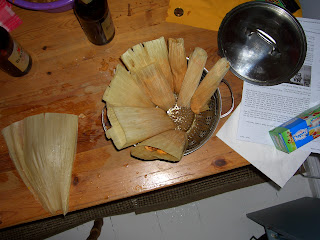 As it turned out, Kristen was extremely proficient at making perfect tamales: 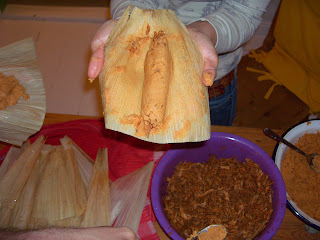 Her secret was to really roll them back and forth in the husk, just as you shape a cigarette in a cigarette paper. She can probably roll something that looks like a Camel with one hand. Anyway, we took the first batch and steamed them while we were rolling the next batch: we had two pots and two steaming baskets we could use, which was fortunate because it sped things up well. The recipe said to steam them for two hours, which seemed excessive and -- fortunately, because we were starving by now -- was. About 30 minutes proved to be enough to firm up the gloppy masa and heat the meat all the way through, and before long we were attacking them like the ravenous beasts we were: the smell had long since permeated the kitchen.

They don't look so good, but if you could smell this photograph, you'd know that looks aren't everything: 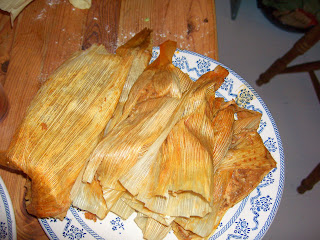 After dinner, we realized there was a lot of meat left over, so we whipped up another bowl of masa and continued rolling. This last batch we didn't bother to steam, and I produced a box of Zip-Loc bags and proceded to pack tamales, six to a bag, ready to freeze. We each wound up with three bags apiece, each as heavy as a brick. Kristen shows off part of her take: 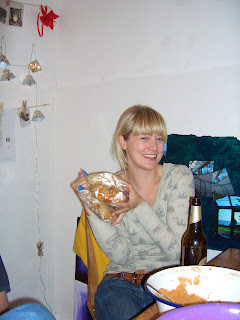 Quite a project, and physically exhausting, but I'd happily do it again. Once, that is, I'm through eating the ones I have.
Posted by Ed Ward at 2:59 PM

Holy Moley, Ed. That report got my stomach growling. I could smell those tamales all the way from Berlin. It was like some kind of sensory dislocation, looking at the pictures and being able to nearly taste the tamales. Oy!

Fortunately, one thing we have in my little corner of the Southwest is a dinky little place called the Tamale Pot, and despite my desire to shed a few pounds, I guess I'll have to pay them a visit.

Do you get green corn tamales over there, Olaf? I've only had them once, but wow, what concentrated flavor!

EW, it's so obvious that I can't believe it's never occurred to you before: a restaurant called...(drum roll)... *BERLIN BITES*!

Quite right, Steve! I'm not poor enough as it is. I should definitely open a restaurant, especially in a town that loves good food as much as this one does.

Thanks for the suggestion.

Yes! We do get green corn tamales, and it's easy to rationalize eating lots of 'em--they sound healthy, right? (I'm sure it's the hog lard that makes them so good.) The variations I like have a hint of lime that even in the dead of winter suggests a beach somewhere and drinks with little umbrellas.

Jesus christus, I got the munchies sup'm fierce just now.

It's okay, Ben: Olaf's bringing us six dozen of them in a couple of weeks.

Do I smuggle them in, or should I declare them to the customs people? Also, I may be violating the PATRIOT act by carrying more than ten tamales across state borders without a federal firearms license.

Excellent. Hey Olaf, can you make it by this Friday--I'm having a Mexican-ish birthday party, so it happens. Continental has some really cheap trans-Atlantic flights now. ;-) Oh yeah, we need a mariachi band too. Muchos gracious!

I'll pick you up at Tegel!