I'm sitting here waiting for the phone call that'll tell me that the SXSW crew is in town and it's time to head off to the ICC to put up the stand in the trade show for PopKomm, which opens tomorrow. So I've got a couple of very minor things to post here before that all happens, and I'll likely have an overall PopKomm post this weekend.

First, some good news. My favorite street artist, Nike, hasn't been much in my eye recently because her pieces have started disappearing at an alarming rate. Hell, if I knew how to take them down, I would have nabbed the girl with the green hair not far from my house before someone else got it. But over the weekend, I was up in Prenzlauer Berg, and found the first of her paintings I've seen dated 2007 -- the latest one I've seen til now was 2005 -- and the good news is, she's still painting babes: 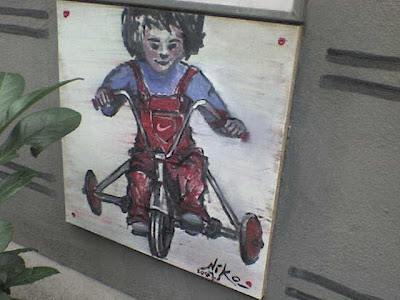 Just...not that kind of babe.

Two more restaurants we won't be eating in:

Bogus Restaurant, on the corner of Choriner Str., Oderberger Str. and Schönhauser Allee. Since I've never seen anyone other than the odd service personnel in here, it may be accurately named.

You gotta wonder: what are these people thinking?

Finally, a quote from the old Dame herself: David Bowie allegedly told people he liked Berlin because it was a "city full of bars with sad and disappointed people." No argument there, Dave, but I fail to see the attraction.
Posted by Ed Ward at 1:58 PM

Well, taken within the context of Bowie's timeline in Berlin, I can kind of see the attraction - that kind of atmosphere was one of the things that kept me interested when I lived there ('87 to '93). After '89 of course, it all changed. A LOT. And not really for the better, at least from my own personal standpoint...