And Of Course There Was Food, Vol 2

Because it seems I already have a post with that name.

At any rate, before the unexpected deliciousness of the food I had in Holland utterly vanishes from my memory, I thought I should mention a few of the discoveries I made during this vacation on the polders.

As I noted in the last post, one of the first things I did after landing in de Meern was to go to a bakery for some bread and a butcher's shop that also had a modest selection of cheeses (and was right next door). The bread was quite surprising: it was dark, but quite soft, and the crust had been topped with coriander, caraway, and cumin seeds along with some rolled oats and sunflower seeds. The cheeses next door were pretty standard: there's really only one kind of cheese in most Dutch cheese shops, but it gets varied by additions and aging. Thus, you can buy a medium-aged cumin Gouda or a young stinging-nettle Gouda (a prize for the first human to figure out how to use those nasty plants as food), and plain Goudas in all ages. I bought a very old one, and its salty, sharp taste was like nothing I've experienced in Germany. The cumin Gouda, young, was a big hit with the Americans.

I came to Utrecht expecting less than nothing from the food. Dutch home cooking isn't a whole lot different than German home cooking, after all, and so I was very pleasantly surprised by what we turned up. There were two major conditions to finding a place to eat. First, Brett has unaccountably become a vegetarian (a fake vegetarian, let it be noted, because he also eats fish) since last we hung out. Second, if Carole were along, the place had to be accessible, which not only lets out the several canal-side restaurants approachable only by a steep wooden staircase, but actually anyplace with a step much over an inch high. Knowing Carole has brought another dimension to the way I see the world: for many, many people, one step is one step too many. Except when we stub our toe or trip over it, most of us don't give it a second thought.

Anyway, it was just Brett and me for the first place we hit (although it's accessible), a modest joint called Opoe's Eethuys at 't Wed 3, right by the Dom. There's no getting around it; dinner in Utrecht is going to run about €25 a person, but in a place like this it's worth it. I had mussels and fries (good ones!) with two mayonnaise-based sauces, and Brett had a fish, which came with a garlic mayonnaise. Like the Belgians, the Dutch are big on mayo, but it sure is good. I don't eat dessert, but Brett does, so he ordered a concoction of vanilla mousse with a mango compote, something that's way too avant-garde for Berlin, I'm afraid. He was impressed enough with the presentation that he had me photograph it: 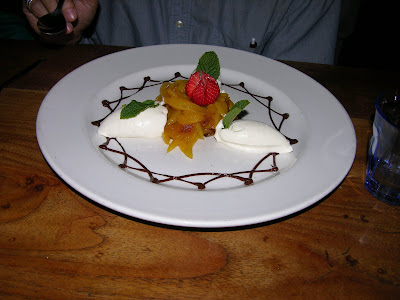 For our next meal, Susan and Carole joined us, and we didn't have a lot of time. We settled on a bar called 3512, Kortejansstraat 4, which didn't look like much, but had sidewalk tables and heaters which made it a good choice. When I noticed that one of the appetizers was trout mousse with red grapefruit and rye bread, I thought it might actually be interesting, and indeed it was. Nobody had that, but between the grilled salmon with teriyaki sauce (a bit too strong, Brett said), my beef carpaccio (excellent), and Carole's salad of beef filet with sesame dressing and sugar snap peas, we were extremely happy. Service was also superb, and, as with Opoe's, the selection of beers (mostly Belgian) was fine.

The next night, Brett and I were on our own again, and we picked the place next door to Opoe's, Lokaal de Reünie. This was quite inexpensive, since we avoided the steaks. He had a salad topped with huge head-on, shell-on shrimp sauteed in garlic oil that was very tasty indeed and I had a kipsate, a Dutch adaptation of the classic peanut-sauced chicken-on-skewers that was nicely spicy, accompanied by yet more fries-and-mayo and a lovely sour "koolsla," which was half carrots and half cabbage.

I'd be remiss if I didn't mention two Utrecht bars of note. The België Bar has about 100 Belgian beers in bottles and about 25 on tap, and is on the Oude Gracht. The crowd can be dodgy, and the place is packed enough at night that we never actually succeeded in drinking there, but I'd like to go back to investigate. And Le Tres Petite Café, also on the canal, was a nice place to watch crowds, incredibly atmospheric inside (and yes, it's very, very small) due to both a pair of small DWA (Dogs With Attitude) and the fact that it's been there since 1702. If the descent to the rest rooms was any more precipitous, it'd be a fireman's pole, though.

Amsterdam is another matter, of course. It's the Big City, and priced accordingly. I was determined that Brett and Carole, who've spent time on Bali (Brett plays in a gamelan orchestra back in Oregon), experience one of my favorite Indonesian restaurants in the city, Kantjil en de Tijger. (The other, Puri Mas, is up another fear-inducing staircase, and has a fairly different menu). Brett had some tofu thing, while Carole and I tucked into their biggest rijstaffel: 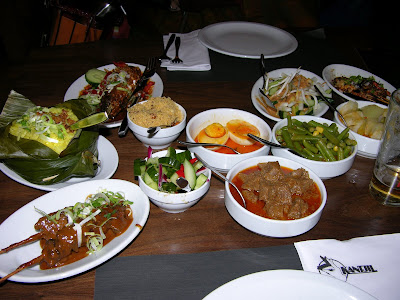 With a little help from Brett on the fish and veggie dishes (including a remarkable shrimp saté I didn't remember from last time), it was pretty well demolished by the time we surrendered.

The next day saw us, of course, on line at the famous Vlaamse Frites place at Voeltboogstraat 31, between the Spui and the Leidsestraat, and I'm happy to report that their samurai sauce, a deceptive pink mayonnaise, is as fiery as ever. Dinner was at a famous traditional Dutch place that's been there on Spuistraat since the 17th Century, where I had an excellent stoempot, mashed potatoes with lots of stuff mixed in, with beef stew and a sausage on the side. Carole had a hearty pea soup -- another traditional Dutch dish. Did I catch the place's name? I did not. But given that it has one entrance on Spuistraat, one in the alley, and one on the parallel street, you can probably find it fairly easily.

The Dutch have had a notable inferiority complex about their beers for some time, and it's only in recent years that they've given the Belgians any competition. For news on this, I always head to De Bierkoning, at Paleisstraat 125 in the shadow of the palace, where they have a mere 950 beers for sale, including a wall of some of the new Dutch craft beers. As seems to always happen, we ran into a customer who was eager to help, and he mentioned a bar where these beers can be sampled, a newish place called Biercafe 't Arendsnest, which has a dozen on tap and 150 in bottles, all Dutch. This was up a series of stone steps, so we didn't go in, but the card is in my file for my next visit.

Overall, the thing which surprised me about the food on this visit was the willingness to experiment with flavor (that trout-and-grapefruit thing at 3512 was worthy of Eric Gower) and not shy away from the dramatic effects which result. The Dutch, of course, were spice merchants for centuries, so it should come as no surprise that there's more spice in their cooking. But as Mike, whose grandmother lives in the southern part of Holland, remarks, there's also more of a tendency to identify with France in the traditional cooking of that part of the country (as there is in Belgium to the south), not just boiling a bunch of stuff up, but working a bit on sauces and seasonings. That the menu in a provincial city like Utrecht is as interesting as it is seems to be proof of this, and, no doubt, the more sensual approach one finds in Catholic Europe instead of the dour, self-denying approach of Protestant Europe (very noticable here in Berlin) plays a part as well. Yes, the Dutch gave the Catholics (ie, the Spanish) the boot long ago, but they cannily kept the good parts -- the music and the food, for instance. Who'da thunk it?
Posted by Ed Ward at 3:27 PM

They didn't kick out all the Catholics! My grandmother's town is thick with popery.

Openly worshipping as a Catholic was illegal until the 19th century in Holland, although I suspect that as the memory of the Spanish occupation faded, enforcement wasn't enforced too hard. I saw one "hidden" chapel in Amsterdam, and heard of several more there and in Utrecht. I also suspect that enforcement was particularly lax in the south, where they were too close to Belgium and France to stay purely Protestant.

Genau. Limburg in particular has always been Catholic. Actually I think those southern parts of the country weren't added until the nineteenth century.