The Writing On The Wall

So why do you suppose Berlin has so much graffiti? Does it contain large gangs of disaffected black or Latino youth? That's one demographic from which graffiti springs in the States, and although I do think there are some Turkish-German posses behind it, that's only a part of the answer.

And why do you suppose so much of Berlin's "graffiti" actually falls under the rubric of "street art?" Sure, there's a large contingent of international artists who work in this fashion, and even the suddenly oh-so-fashionable Banksy has his rats around my neighborhood, but that, too, is only part of the answer.

And I'd say that another part of the answer that's being ignored is simply this: because Berlin's official public art sucks. Really: I've never been in a place with so much bad outdoor sculpture, eye-straining murals, and, of course, all those damn bears.

So I want to spend just a minute here examining three works of art. The first is public: 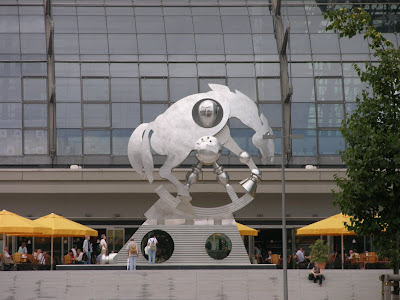 This sucker sat under a tarp for I don't know how long before being unveiled at the Hauptbahnhof a few weeks ago. It should have stayed there. There's a plaque on the side, which explains that it's a memorial to the Lehrter Stadtbahnhof which used to stand where the Hauptbahnhof now does, and was created by a Prof. somebody or other using stainless steel and "high-tech elements" to symbolize, ummm, this and that. The horse has a clock-like face set in its side with bad mask-like faces which revolve, so I guess having an electric motor is high-tech. Underneath, in the base, are various gears the "artist" has modified with more faces, as well as bits of the brickwork from the old Lehrter Stadtbahnhof, although whether they're original brick from the old building or part of the multi-million-Euro reconstruction which was torn down a couple of years after it was finished is hard to tell. The whole thing, towering over an outdoor eating area, is of such amazing ugliness that it's breathtaking. Hard to figure how the Ponyhof missed something this size.

Now, Exhibit B is a very small piece, currently hard to find because trees obscure it. 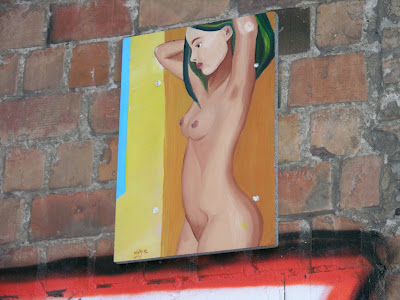 Yup. Nike again. What's disarming about these paintings, besides the lack of formal skill, is the feeling one gets when one comes upon them, always in an unexpected place, and almost always cheering you up by the very act of discovery. That's something I think public art should do, and it informs my own reactions to things like, say, the wall rabbits or the long-gone, intricate cutouts by the New York master (mistress?) Swoon.

And then there are the works which proclaim mastery: 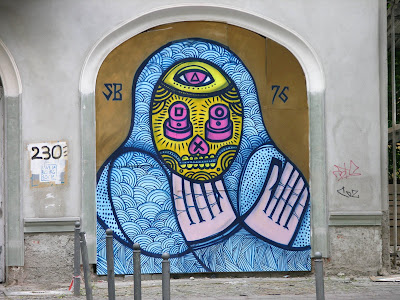 I have no idea who's behind this (and another one I've found), but a huge Russian icon-on-acid popping up on the corner of your street (this is at the end of Torstr. at Oranienburger Tor) is something you notice. It's taller than I am, and, needless to say, many times wider. The palette of color is quite basic, but used with the kind of skill any commercial artist would envy. And the subject matter, well, it makes you think.

If I were running this city (and there's a nighmare I've yet to have) I'd discreetly channel funds to the likes of Nike, Swoon, and the Acid Iconist in hopes that they'd continue to beautify what's not a very beautiful cityscape. The more obscure the place beautified, the bigger the fee. Meanwhile, it's encouraging that you don't actually have to walk past the Iron Horse to catch your train, although it's hard not to cast it a glance if, as I do, you take the bus to the Hauptbahnhof (well, when I have luggage I do, anyway). And it's further encouraging that these other artists are out there, continuing to surprise us.
Posted by Ed Ward at 3:24 PM

The acid-icon is wonderful. If I saw that from across the street, I'd jay-walk.

Apparently Harmut Mehdorn, the ever-popular DB boss, commissioned a very similar piece of art from the same artist as a corporate HQ artwork when he was the big cheese at Heidelberger Druck (big maker of print machines).

Actually, when I first saw the photo, I thought it was the horse sculpture in front of Heidelberger Druckmaschinen; it's remarkably similar to say the least.

Yep. The Heidelberg horse is here. And I found what looked like Latino gang graffiti in Berlin over here.

Public art sucks everywhere.
You get eaten up by panels and mayors and censors and mothers and assholes at every turn until you (at least me) piss off.
That horse, however, is what the neighborhood deserves.

Yeah, Hud, how come Banksy's famous and she's not?

For that matter how come Banksy's famous and you're not?

But that's another ball o' wax.

While I was waiting for a train connection at the new Berlin HB a couple of weeks ago, I saw that metal horse sculpture through the window from the platform. Oddly, in the photo the head is down, but I distinctly recall it pointing skyward. Can it be that this horse actually moves in slow motion? And that if you stuck a video on it for an hour or so and sped it up, it would give the impression of a galloping horse? If so, then without having even seen it again I'd say it's a brilliant idea: the iron horse, made stainless in our sanitized age, running on the spot, like so many hamsters in fitness clubs.

For shite public art, it's hard to beat this masterpiece by Tracey Emin. Her explanations are priceless.

Here is is from another angle. You have to look close.

Nice someone appreciates the icon as much as I did. :-) The usual response is "vandalism". At least when you read other Berlin blogs.

Look at this scheme in London. I think someone had your idea already.

The DB horse thing (and MP is right, it's almost identical to something Mehdorn had commissioned in a previous career) isn't public art as such. It's in public (never mind 'is it art?'), but it's not from the state or the government, but just another piece of environmental vandalism carried out by a private company.

Those buddy bears need all to be burnt (a problem as they're made of fibreglass) /shot/demolished/destroyed. While private entities also pay for them, they do so with the support and encouragement of Berlin city council. A worse example of public "art" I cannot find or contemplate.

With artists like Tracey Emin the artist herself is the artwork, never mind the rest. This is something that has been latent in western art since the Renaissance and the beginnings of the Cult Of The Great Artist (think, e.g., of all the stories about Titian) and what we see here is its terminal, rather debased but perfectly logical form: the art is so unsubstantial as to become evanescent and you are left with nothing but the artist herself: the perfect piece of abstract art. I find it both repulsive and fascinating.

I dunno, emptypockets. If Nike's getting what Tracey Emin's getting for her artworks, maybe I should hit her up for a loan.