When I first moved here, I lived in a neighborhood known as Moabit. The name is a corruption of the French term "terre maudit," or cursed land, but it's most familiar to Germans as the name of a prison, which, sure enough, stood right up at the end of the block. It was where many of the Baader-Meinhof Gang were held, for instance, and, during my tenure in Moabit, it was the home of the famous folk-hero/extortionist known as "Dagobert," which is what the Germans call Scrooge McDuck. Dagobert had extorted money from several department stores, and kept getting away with it. Once, the cops were hot on his trail, and in a very Berlinisch moment, lost him when they slipped in dogshit on the sidewalk while chasing him. One of the buildings there is quite old, and has classic barred windows. Women gather in the park across from the prison on good days and have their kids wave at Daddy.

So I thought that was all there was to Moabit Prison, and my obsessive walking through the neighborhood during several months' total unemployment saw to it that I knew the surrounding area very well. Leave it to Berlin, though, to confound that idea.

Last week, I had an appointment on Kantstr., way over in scary West Berlin, and, for old time's sake (and because I'm once again totally without work), I decided to walk. The easiest way is to head to my old neighborhood via Invalidenstr., past the Hauptbahnhof, then across the Spree and follow the S-Bahn. I gave myself lots of time so I could take the occasional diversion down back streets for old time's sake.

But I'd no sooner gotten just past the Hauptbahnhof and all the myriad new streets the tunnel there has spawned, when I found something which must have been there in the old days, but which I'd totally missed. It was now a new park: Moabit Prison Historical Park. I took a glance in and told myself I'd be back. And today I was. 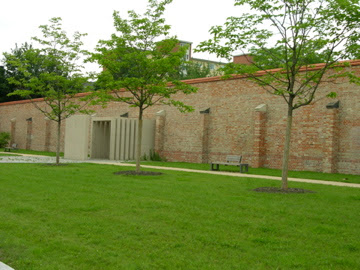 The bland outside, it must be said, masks an even blander inside. Had it not been for the glass-encased explanatory posters, I'd never have guessed what this was. I was shocked to find that it had once housed Wilhelm Voigt, the "Captain from Köpenick" himself -- the Dagobert of his day. Several notable Socialists were also thrown in the klink there by the Nazis as was one of the 1944 Hitler plotters. But most of the inmates were just run-of-the-mill criminals, something Berlin never had a shortage of in the 19th and 20th Centuries.

Inside, there isn't much to see, mostly because the thing was almost totally destroyed by Allied bombs. Instead, it's filled with symbolism. 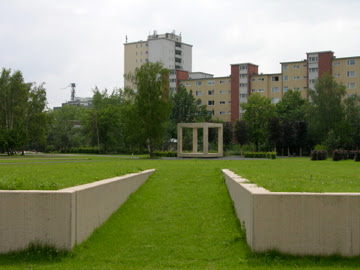 I forget what the cube represents, other than the center of the buildings' wings. The trees planted within the walls all have symbolic meanings, as, no doubt, do the small concrete posts with constellations etched into them. A couple of the building's wings are represented by trenches, one of which you see here. I kept having to run outside to one of the entrances to see what symbol I was standing next to at any given time. There's a dolorous poem whitewashed across one of the walls, the beginning of which is visible here: 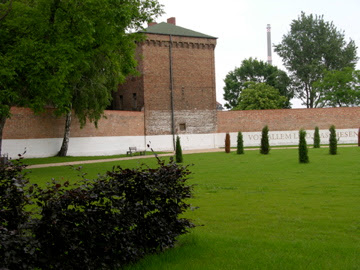 The tall building is one of the houses where the "civil servants" (ie, the guards) lived. I have no idea why the signage uses that name. Here, however, is where most of the folks lived: 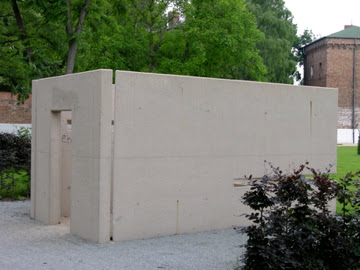 Well, not actually. That's a reproduction of the dimensions of one of the cells, and, according to the list of symbols, contains a sound installation. I not only couldn't hear it, I couldn't find any means by which it would be broadcast, so maybe that's a coming attraction.

Although the place is pretty stark and uninviting, there's a climbing wall and see-saw for kids, and a couple of nicely shaded picnic tables. Despite the fact that it was a nice day, I was usually sharing the park with no more than two other people -- on one occasion two huge women and their three huge dogs, one of whom came up to me to get his ears scratched, which I did, but apparently not enough, since he refused to leave until he felt he'd been properly appreciated.

Maybe it just hasn't been discovered yet: it only opened last year, apparently. Or maybe the symbolic sculpture and landscaping make it hard to use. Or maybe Berliners are getting tired of feel-bad monuments, since this one certainly does evoke the starkness and isolation of imprisonment.

Naaah. Can't be that last one. Berliners love to feel bad.
Posted by Ed Ward at 3:28 PM

I live not too far from there. The park just opened, behind schedule, of course, in September or October; I don't know what it was before. I walk through it on a regular basis, and, though there are always people there, there are rarely many people there. Like me I think most people just cut through it on their way somewhere else. In the afternons there is always a small crowd eating lunches; I assume they work in Hauptbahnhof and want to enjoy their lunchbreak in a place with less cement.

thanks for the tip Ed...I had planned to do some exploring Moabit during my last trip but got derailed by rain...I definately will do so the next time.

Dude, it's a feel-bad town!

Certainly: I need the publicity.

is it true you've been nominated to be the next ruling bugger-master??? running on the feel-bad ticket???

and, how can you put the hearts of your loyal readership aflutter by entitling your post this way? i thought for a second you might - improbably - be posting from lockup

it was in this prison that Haushofer wrote 'Moabit Sonnets' which he had hidden in his coat as he was released from the prison days before the end of the war. he crossed the street and making it over to the stone stairway behind Lehrter Bahnhof he was stopped by a SS execution squad and promptly shot dead. the ruined steps are still there - just across the street from restaurant 'Paris-Moskau'. his brother found his body a few days later and with it - the pages that would be published as the sonnets.

toured the prison park before it opened last summer and am glad to hear that it has been completed...

And I, being a philistine, had never heard of this guy, although he's the one in the Nazi uniform shown as one of the three most famous prisoners.

also a week after Haushofer was murdered by the SS, Martin Bormann would be killed in the same area by russian troops as he tried to flee Berlin with Hitler's surgeon. They had followed the S-Bahn tracks down from Friedrichstrasse hoping to break out to the west. Despite rumours of his survival and flight to South America his skeleton was positively identified after being found in 1972 - definitively proving that actually wasn't Bormann playing bass on the Sex Pistol's 'Great Rock and Roll Swindle'!