I've survived May Day, with its illiterate marchers: 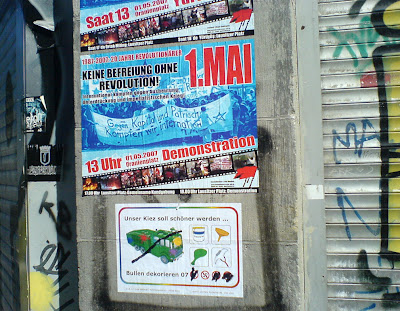 These posters (above) were everywhere. Everywhere. You just have to wonder about people who'd represent themselves like that. Let alone march with a huge banner with a boner like that in it. (You may have to click the photo to get my point here). Thanks to Kean for snapping this.

I've survived Christi Himmelfahrt, the silliest-named German holiday, on the 14th, which is also "Men's Day," with men roaming the city drinking beer until they can barely stagger. This is, as you may have parsed, Ascension Day. What that has to do with men in particular I have no idea. But it's a good day to hole up inside. I had to go to Hauptbahnhof, though; I had no idea it was a holiday.

Modest suggestion, Germany: In America, you'll find signs on many businesses saying, for example, "We will be closed all day on Tuesday, December 25, Christmas Day." Now, Christmas is not only a date everyone in the U.S. recognizes, but it's one that never changes. It's always December 25. Things like Ascension Day and Whitsun (which is this weekend: stuff is closed on Monday, folks) change according to Easter, the date of which is different every year. I know courtesy isn't big around here, but if Berlin is, as it pretends, a "world city," perhaps it might actually act like one and tell those of us who practice other religions, or no religion at all, when the religious state holidays are.

Hauptbahnhof was jammed, of course, but not with as many drunks as I'd anticipated. The downstairs is still dark and gloomy, but the Diplodocus skeleton upstairs is a nice touch.

I survived the reopening of Tresor, although, of course, I didn't go. For me, Tresor will always be the basement of the bombed building it's named for, and even that turned into a bridge-and-tunnel-kid club before it closed down. Several people sent me an IHT story about Dmitri's plans for his new location. Not that he's ever asked my advice, but first I'd do something about the name. By the time he finally finds the dough to make this happen -- if he ever does -- people will have long ago forgotten what a "modem" is. 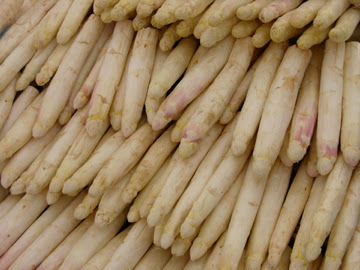 I have to say, I don't see the attraction of white asparagus, which is what Germans invariably mean by "Spargel." It seems fairly tasteless, is often quite fibrous (not always: when my pals Ranya and Susanna had a restaurant they could make it well), and is served in such boring ways -- with ham and boiled potatoes, with schnitzel and boiled potatoes, with Béarnaise sauce dumped over it most of the time, or just plain butter -- that I tend to avoid restaurants during the season. (Well, being broke has something to do with it, too).

Fortunately, the Vietnamese guy I buy lots of vegetables from has a good supply of superb green asparagus at remarkable prices, and thanks to him I've discovered roasted asparagus, which gives it a totally different flavor, due to the caramelization of sugars I'd never guessed existed, although, in retrospect, they're certainly there. There's just so much flavor in green asparagus I'm eternally grateful it's not in such high demand around here, making it easily found and affordable for the likes of me. But, if a recent trip to the outdoor market in Hackescher Markt means anything, the Germans may be catching on. I just had to snap that label! 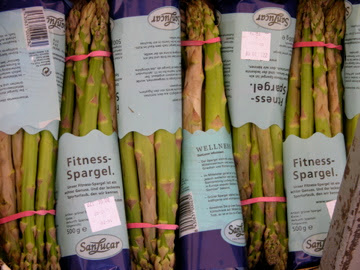 Fitness: yes, actual vitamins'll do that to you...

And I expect I'll survive Burger King's unsettling campaign for its new sandwich: Long Chicken. No relation -- I don't think -- to Long Pig.
Posted by Ed Ward at 2:58 PM

I don't think the white asparagus is that bad, if you peel it before you cook it, but it doesn't measure up to green. I'd say, "I just don't get why Germans eat the white stuff, it's more work to produce, more expensive, less healthy and less flavorful," but I know why they like it: it's white and bland. I went to a restaurant recently and ordered one of the Tagesgerichte: Spargel with Hollandaise sauce and potatoes on the side. It was quite German: a plate of mild, colorless food.
I was also mystified by the "Long Chicken" campaign, but it doens't measure up to the best nonsensical use of English in product marketing I've encountered: the Lady Protector razor.

I'm not with you on the white asparagus, Ed. There is something that I can only describe as toothy freshness if it's prepared well that no other vegetable yields, and I really dug it when I lived there as well as two years ago when we were in Berlin in May.

Actually, now that I think of it, fresh jicama with lime juice over it has that same indefinable quality, even though it's a root vegetable. Well, they're both from underground.

As you can see, my palate is not too sophisticated.

When I cooked at Word of Mouth from 1997- 2001, I must have roasted 10,000 pounds of asparagus. It's even better grilled. It's a staple now in the US. Everybody roasts and grills veggies of all sorts including asparagus. At WFM Union Square in New York City, I grilled asparagus almost every day. I agree with you about white asparagus--it's nice though in a bundle of white, green and purple asparagus bound with a leek ribbon.

Ed, your photography is getting pretty good!

Maureen, if you don't know how to defend yourself with a razor, you need a Lady Protector. Unless, of course, you're not a lady...

Olaf, I'd kill for some jicama. One of the many vegetables you never see here, although I bet they grow it in Israel or one of the other countries which exports to Germany.

And M. Bovee, those pix were taken for a foodie website which solicited my contributions and then died two months into its existence. The current Spargel crop -- those photos are about three weeks old -- is much, much better-looking.

I must say in this picture some of the asparaguses look like ugly cocks. Surely there has to be better/more decent pictures?

It's called "Lady Protector" in English-speaking countries too. They just think all women are morons, is all.

From the great Komoedian Harmonists

i don't get it. why do they call cocks "lady protectors"?

Vlad: because according to "science", they're mother's little helper.

bowdelerizded: thank you for much helping reading tip; I much like your site, feministing; funny laughs; good humor; the only semen withdrawl i'd known of before was dunkirk