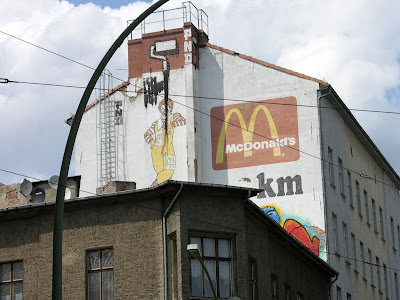 Saturday night I was invited to dinner at the dancer's house, way down in Tempelhof, and after the thunderstorms cleared, I started walking. It's only about three miles, and economics dictated shank's mare. This meant walking over to Friedrichstr. and then walking the entire length of the street, which is usually fascinating, because after Checkpoint Charlie it turns into a fairly tawdry, largely Turkish/Arab neighborhood, a part of Berlin the tourists don't see. That culminates in a really seedy housing project at Hallesches Tor, after which you cross over onto Mehringdamm, and into the old Kreuzberg 61.

Anyway, I'd no sooner started out than I got a rude shock. The McDonald's on Friedrichstr. was gone. A sign for some GastroImmo firm announced it was for rent.

Although I'd never patronized the place, the McDonald's was a landmark. Visitors coming to my place via the U-Bahn would always get the same instructions: "Okay, take the U-Bahn to Oranienburger Tor station" -- and then I'd have to spell Oranienburger, of course, down to the last letter, as if there were lots of similar stations on the line -- "and walk in the direction the train was moving and go up the stairs. Okay, now, look left and you'll see a McDonald's, so you know you're in the right place. But you walk right, towards the pizza place..."

That pizza place had been a Burger King, locked in the usual corporate war against McDonald's, but it probably lost the battle because the word got out that its upstairs bathrooms were ideal places to shoot up, and the local junkies took full advantage. (This came to light, pardon the pun, when it was announced that they'd installed black light in the bathrooms, which supposedly made it very difficult to shoot up. Why this was supposed to be so I can't say.) Then it was dozens of other things before falling into the hands of the pizza guys. But McDonald's was always buzzing. It always is in Europe: no other symbol of what makes American pop culture so desirable seems to come close. Maybe if someone would take the time and trouble to learn how to make a good hamburger on this continent this wouldn't be the case.

(Oh, and this is the place to mention that the place with the great hamburgers I wrote about some time ago, Hazelwood, on Choriner Str., has lost the chef who designed the menu, taken a swift turn towards the Deutsch, and is no longer hamburger heaven in Berlin. The chef says she's going to have another project soon, and meanwhile your indefatigable BerlinBites team is investigating several rumors of better burgers. Stay tuned.)

The thing I noticed about McDonald's is that it's a status symbol for teenagers. A Big Mac is a good deal more expensive than a Döner Kebap (€3.70 versus around €2), and that, along with your fashionable clothing, helps identify you and your posse as the cool kids you are. In Europe, that's who McDonald's seemed to be marketing to, too: in America, it seems to be younger kids, but here, the promotions were all about hit CD compilations and iTunes downloads.

So, is this changing? Or is all the construction in the immediate vicinity driving customers away? Why did McDonald's close at what would seem to me to be a perfect location -- especially given that it had traffic all the time? Did one too many Germans see Supersize Me? Do they even supersize in German McDonald's?

I mean, other than having a familiar place vanish, it's no big deal for me: I haven't eaten at McDonald's since the '70s, when one opened up on Market Street in San Francisco, the first non-freestanding McDonald's in America. At the time, I was writing for a brand new magazine called Mother Jones, whose offices were immediately above, and whose elevator was one of the slowest I've encountered outside the Communist world. (Soviet elevators are a whole 'nother tirade.) The exhaust from the McDonald's fries leaked into the vestibule, where you waited and waited for the elevator to make its mammoth three-story descent, and a certain amount of the grill odor did, too. It was like standing in the middle of a Big Mac and fries, and, like the doughnut bakery that vented directly into two (unusable) rooms in an apartment I rented in college, the smell permeated my memory to such an extent that I can taste McDonald's fries (or doughnuts) just by closing my eyes and concentrating for a couple of seconds. Plus, of course, until I moved here, there were always much better burgers to be had when I wanted them.

This leaves the pizza place, Dada Falafel (run by Iraqi refugees from Saddam), and, of course, the great YumMee bánh mi sandwich joint (now serving pho!) as the only fast-food alternatives in that vicinity. But it doesn't make the mystery of why McDonald's would vanish overnight from such a plum location any clearer.
Posted by Ed Ward at 2:11 PM

Maybe they moved to larger / smaller premises? A lot of McDonalds here are metamorphosing into McCafés, which are McDonalds cunningly disguised as a kind of low-budget Starbucks, which is fine until you discover ketchup smeared over the loungy-style seating.

If I had to live with a seeping fast food smell, donuts would be it. Krispy Kreme if possible.
In my twenties I lived above a chip shop and the smell wasn't too bad; perhaps the frying fat was better 'in those days'. More recent, in San Francisco, the stink from a nearby Popeye's chicken take-away caused me to hold my breath while waiting for the bus on Divisadero (not good when waiting for the #24).

Some people might say that Mother Jones elevator was actually not outside the Communist world.

hard to believe maybe, but true: mcCafes feature cheap n'tasty coffee, when compared with many fashionable cafes... but then where's the pose value in a mcD?? also, the mcD stabs at 'cafefood' is surely no worse than starbux?

I had to google "Shank's mare" and discovered that the modern term in Britain is "Shank's pony".

C'mon Mr. Rock Historian who the hell cares..Don't look a gift horse in the mouth . If that shit was to vanish from the face of the earth in every single location I would scream joyous praise to the heavens in thanfulness

Actually, the place was not that thriving at all... I remember it always being considerably empty and kindof out of the way: hip tourists/tourists looking for hip places would walk the other way.
Plus, why have crap fries and a soggy burger if you can have a doener for half the money?
Anyhow, considering the fuss they are making about the new McD in Wrangelkiez (decried as the-end-of-civilization-as-we-know-it) the chain is not dead yet! Alas...
http://www.spiegel.de/politik/deutschland/0,1518,483535,00.html