Now listen all you people, especially you girls

As Marvin Gaye calls the congregation to order, I have a very serious question for the ladies out there, particularly the German ladies, but really nationality is secondary to gender here, because I need some information only you can provide me with.

Right. Take a look at the gentleman below, whose picture is tied to every single lamppost in my neighborhood, since he's running for some local office on the CDU ticket. Never mind that he hasn't a chance in hell, just check out the picture. 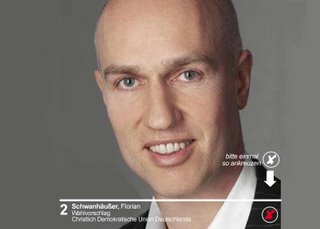 Now, just what is your reaction to him as a sex object?

If you answered c you're encouraged to stick around and contribute to the theoretical discussion, especially if you're Belledame222 or of a similarly cranky disposition.

But if you answered a, I have a question.

Now, actually, what's weird about this particular photo is that if you look at it closely, you'll see he's actually just cut his hair way short, and it's greying. But on the campaign photos -- and I've looked carefully -- he's been Photoshopped to a skin-smooth shave. And the reason for this is obvious: to increase his appeal, to glamorize his image. Plus, there's a threat involved, because the other posters he's put up in the past couple of days don't have his image on them, but, instead, three promises: More work, more art, more children. The "more work" is what every politician's offering in a city with 20% unemployment, and the "more art" implies he'll loosen the purse-strings for the starving cultural budget here, but I'm really worried about that last one. Is he planning to do this all by himself? And if so, is this why he's presenting himself looking like this, Photoshop or no?

From what I've been able to tell, this particular concept of male beauty is indigenous to Germany. I'm not talking about skinheads; they have their own costume, their own rituals, their own look. No, I'm talking about professional men, artists, intellectuals, people in or aspiring to the higher economic and social reaches. I've noticed this for years around here. And does it work? Boy, does it ever: you go to some event, look around for the most beautiful woman there, and dollars to doughnuts she'll soon float into the orbit of a suit with a pink knob on top of it and just go all limp.

Now, okay, there's a certain amount of jealousy at work here. I was doomed from the beginning. My dad and every one of his brothers was hit by male pattern baldness, and, starting in my late 20s just like the textbooks say, so was I. I have this fantasy of discovering our ancestral home in Devonshire, where we settled as Normans and changed from Oeuvrards to Wards, walking into the pub, and having it go quiet as they do when an outsider walks in, and dozens of similar hairlines all craning around to see who the intruder is. Naturally, the minute I take off my hat, they're all eager to know who I am.

But the thing is, I don't think my hair looks bad. Well, it does now; I'm in need of a haircut, and I'll get one as soon as I visit the States next month. But in general, given my genes, I like to think it makes me look distinguished, maybe even smart, like the hair evaporated due to the intensity of the thought occurring directly underneath it. And then there's that belief among African-American women that it's proof of extra virility (not completely a legend, since testosterone does play a part in balding, which is why you see so very few naturally bald women).

Still: do you suppose it would help my utterly moribund social life if I just took a razor to what little remains? I mean, I could buy a black scarf and a yellow sweater and go out on Halloween as a #2 pencil. Were I to do the Mr. Clean (Mr. Proper here in Germany), would the fräuleins flock around, all seeking to know my mystery? Would I be able to stand looking in a mirror, though, without feeling queasy?

I really don't know. It's possibly the most unfathomable of all the German cultural mysteries, and one I'll probably never solve. But I do know this: the image this politician immediately brought to my mind: the Martian Popping Thing. 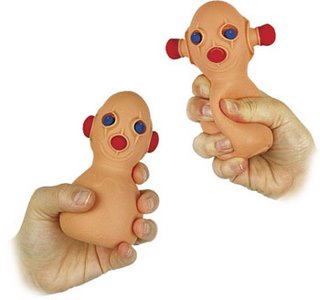 Can I get a wi-iit-ness?

-snerk- ask and ye shall receive...

well. hm. about the bald, i am sort of neutral. i think that there is probably something more aesthetically pleasing about utter smoothness than stubble for a lot of people, is most of it. they like to rub, or something. check their lipstick? shrug. anyway doesn't seem to be an exclusively German thing either, that; i have noticed it over here as well (vaguely, peripherally, as it were)

the guy himself, well, i guess he's not bad; but, isn't the lower half of his face, especially the mouth, sort of disproportionate to the rest of him? kind of makes me think of Mr. Potato Head or summat.

maybe it's just me

That man has great eyebrows and a GREAT nose, but he has the mouth of Prince Andrew, and that is a bad, bad, bad thing. Fleshy lips plus big teeth - no.

The shaved head thing is a good thing though, especially because you can run your hand over the stubbly stuff and it feels nice. As a female, that's my two cents worth.

I don't thank the attraction to baldies is just a German thing. There are many bald celebrity hotties: Bruce Willis, Sean Connery, Michael Jordon, Ed Harris, Patrick Stewart, Vin Diesel, Andre Agassi, and Samuel L. Jackson, to name a few. These guys all have quite a few American fans who find them sexy (I even had a teenage crush on Mulder and Scully's bald boss on the X-Files - I might have been the only one). But I've also found it to be a generational thing. My mother and her group seem to see it as a sign of being old, while I find that my friends and I (Gen-X-ers) find it sexy. I mean, I knew guys who were balding in high school, so I definitely don't think of balding as age-related.

And as for hairloss, I think it's much sexier if the guy shaves it all off or goes very short (which option to go with depends on headshape).

And the guy in the ad, I personally don't find him attractive, but I could imagine that some women would.

I'm with Christina, I date men, and no, a preference for bald over partially pelted is not a strictly German thing at all.

I worked for seven years in the film special effects industry, where it seemed that a disproportionate number of men were losing their hair early. I put it down to their proximity to the computers, but I did notice that the ones who yielded to the blade looked a lot better to me than the ones who didn't.

I think--at least in my case--when a man shaves his head, it indicates that he's paying attention. Let me note that I feel the same way about men with long hair--if they're taking care of it, fine. But if it's dull, stringy, uncared-for, ick.

I think the CDU politician looks almost exactly like that Martian popping thing and consider the parallel brilliant. But on the basis of this survey, when I go bald, I'm shaving.

If anyone wants another specimen to compare, there's one gracing the front of the BVG's August magazine (large PDF file).

Does anyone share my concern about the "Vokuhila" style (vorne kurz, hinten lang) prevalent among certain sections of the population and currently enjoying political prominence in the form of Norbert Raeder, the leader of Berlin's "Grey Panther" party?

That "Vokuhila" you mention is called a "mullet" in America (and, I think, England), and there are many, many mullet-mocking websites out there. With reason, I'd say.

Aaaaaah (flash of comprehension, as what was previously a mysterious reference to a kind of fish in a hairstyling context suddenly becomes clear), so that's what a mullet is. I don't think it's called that in the UK, though my colloquial vocabulary is quaintly dated, so it may be in common use and I just haven't heard it.

It is indeed a mullet in the UK.
There was a band called Tiger sometime in the 1990s who came from Devon and had mullets and wore heavy metal t-shirts and the music press tried to spin some kind of "so uncool they're hip" line.
They disappeared.
A few years later and Hoxton is crammed to the gills with hip young Londoners with ugly mullets wearing heavy metal t-shirts.
C'est la via.

I once went into a hair salon in Rostock and came out with a mullet. I cried for days and had to practically shave my head.

Given the choice between a mullet and the shaved baldness, I'd go for the baldness, though I suspect my head shape is more suited for a mullet, alas.

Jeez, Christina, a girl-mullet is even worse than a guy-mullet. Hope you found a hat until it grew out. And Mountpenguin, nobody's head is more suitably shaped for a mullet.