The Crumbs Of Late Summer

It's always a bit astonishing for someone who moves to Berlin from more salubrious climates to notice that it's getting distinctly chilly by the third week of August -- the week in which I usually took my vacation when I worked at the newspaper in Texas because I knew that the psychological moment when I just couldn't take any more occurred in that week. But it's been a good summer, warm enough that I'm kicking myself for not planting jalapenos, and...like a few other things, it's coming to an end. Herewith some miscellaneous observations.

The invasion of Eastern European street musicians ending is one thing I always look forward to when summer ends, something which occurred to me the other day, when, trapped under the U-Bahn tracks at Schönhauser Allee waiting for the light to change, I endured a group of two saxophones, two accordions, and a three-year-old dancing boy while a guy in a shiny green suit rattled a coffee-cup with some change in it under my nose demanding payment. These people have annoyed me so much over the years that I found myself incapable of sharing the general world-music endorsement of the various Orkesters and wedding bands churning out records a couple of years ago. I still can't listen to that stuff.

But...there is one mysterious virtuoso among us. His name is Stefan Daskalos, and he plays the gadulka, a metal-stringed bowed instrument from his native Bulgaria. I first caught him in that same under-the-tracks site, fat, bearded, and playing like a dervish. Part of the instrument's charm is its haunting sound: you'd never think something that small would make that much noise, but the secret is in the sympathetic strings, which ring in such a way that the instrument sounds like it's being played in an echo chamber.

I caught up with him this weekend as he sat next to the Kettwurstbudde on a nice day, sawing away. This time, I thought, I'd give him a euro or two -- I never give money to street musicians -- in return for standing and watching his technique for a few minutes. As I stood there, another guy, shabbily dressed, red-faced and missing most of his teeth, came and stood next to me. Then, unfortunately, he started talking to me in an almost-impenetrable accent. What I could make out was that he was from "Ost-Preussen," and that someone he'd known there played a "Geige" like this. I made it out because he said it several times. Then Daskalos stopped playing and Mr. Ost-Preussen started giving his spiel to him. Daskalos' gadulka wasn't very pretty -- there was no ornamentation at all and the wood wasn't at all polished -- but it was clear that it was a good instrument. To shut up Ost-Preussen, Daskalos started another tune, and I looked closer. He wasn't fretting the strings, he was stopping them with the two middle fingernails of his left hand, which had been reinforced with some sort of varnish that had turned a greenish-black.

After the tune, I made a hasty decision and handed Daskalos €10 for the double CD of tunes he was selling, figuring that would buy me an interview, too. He told me that the instrument was made -- by himself -- out of a single piece of wood (although I can't really believe this, given how thin the upper face has to be to resonate). It was clearly a homemade instrument, though, right down to the nut holding the strings. He and the gadulka were both from Bulgaria, and it was at that point that I started hearing "Ost-Preussen!" being shouted and things got a bit confused. There was something about a son and a financial catastrophe, and as our neighbor got louder, he picked up the bow and started another hora. I thanked him and went to the bank, and as I was walking there it occurred to me that I should take a picture for the blog.

Nope: he'd made twenty euros at one location (Ost-Preussen had also bought one), so it was time to move on. I saw him the other day under the U-Bahn -- it does have good acoustic properties -- but I didn't have time to stop. Sill, recommending a street musician is a new one on me, so if you see him, take a minute or two to listen to him and watch his astonishing technique. And if you're tempted to buy a gadulka, this guy has them for between $350 and $600, plus case and shipping.

In other live world-music notes, someone in my building has started playing the sitar. Since whoever it is doesn't seem to understand how to play an alap, fumbles the jod, and spends the gat showing off flashy, if fumble-fingered, technique, I gotta assume he/she is German. Still, I (unlike some of my neighbors) enjoy someone else's musical tradition being butchered instead of my own. The sound is still charming, even if the execution isn't. And we also have an oboist somewhere here who practices with the windows shut. He/she's very good.

Congratulations to Ben and Yuhang on their wedding! It, and the events around it, made me think a little about what it means to live in a foreign culture. Ben wanted a bachelor party, but quickly discovered there was no strip bar available for him to celebrate in. We started at The Bird, and I parted company with the merry crew as they headed to Oranienburger Str. for the "American" strip bar -- which I heard was a major disappointment. But at least he didn't dress up in a stupid costume and wander around a public place with his friends in matching t-shirts acting dumb, which is apparently a German tradition. I noticed it recently on a return trip from France, when I had two hours to contemplate the Cologne railway station and a woman, dressed as a scarecrow or tramp, was going around giving away little items which were tied to her costume as her friends handed out leaflets of some sort. There's probably a name for this ritual self-humiliation, and there's probably a deep cultural message in it, but I haven't bothered to think much about it.

Ben and Yuhang did, however, participate in another weird German tradition, the Polterabend. "Poltern," my dictionary says, means "to crash about," which perfectly describes the Poltergeist phenomenon, questionable though it may be. On Polterabend, your friends show up with crockery, which they then smash. According to Wikipedia, this is supposed to bring luck. But it got me thinking: would I want to do this if I were to marry a non-German here? (For the utterly clueless out there: Yuhang is not a traditional German name. Or an untraditional one, either. And Ben is American.)

The answer I came up with is no. Not just because years of poverty has made me wary of waste, which this custom certainly indulges in, but because it's like putting on a costume. Unlike Germans, who desperately don't want to be German, I've never felt that I've needed to assimilate in other than the absolutely necessary ways, like learning the language to the best of my ability, saying "hello" when I enter a shop (a kind of pan-European custom, actually), registering with the police when I move into a new place, and generally respecting others' rights to their traditions. It's not out of fear of losing my identity, but more taking pride in the bits of my identity that don't harm anyone's right to be who they are. On the one hand, I've certainly participated in Thanksgiving and Fourth of July meals -- which I've shared with Germans -- and I've also participated in German traditions like St. Martin's Day and the German version of Christmas. I even did the melted-lead fortune-telling thing one New Year's.

But I've also inadvertantly participated in a German tradition which may have colored my answer. On my 50th birthday, I invited a lot of people for a meal or a drink at my favorite restaurant, Honigmond. I made it clear that I was not following the German tradition of paying for it all: to "invite" someone in German means you're going to pay for it. I was simply asking people to show up, and they would have to pay for their own stuff. I made it explicit in the e-mail I sent around, in fact. It was a good party, I got some wonderful presents, and at the end, I gathered them up and went to pay for my meal and the beers I'd had and was confronted with an extra DM350 on the bill. One of the people I'd invited (and yes, Christian Maith, I know it was you, you coward) had invited a number of his friends, people I didn't even know, and they'd eaten and drunk on my tab and then left.

Ben and Yuhang's party was, but for the odd flying shard of pottery coming a little too close for comfort, a far happier affair, and I wish them much happiness. And I may yet think more about this, because last night I started another of William Dalrymple's magnificent books on India, White Mughals

, which has started with a detailed overview of how the earliest colonizers and merchants in India were seduced by Islam (and, in rare cases, Hinduism, although Hindus don't convert, as Muslims do, believing one has to be born into the religion) and "went native."

Finally, earlier this summer, I had a visitor with whom I was walking up Brunnenstr., when we came upon, of all things, a new painting by Nike! It was even dated '08, so I know she's still working. Unfortunately, the picture this woman took never made it into my in-box for some reason, and I didn't get it until the other day. So here she is, Nike's new nude. Who, I should add, was missing a week ago when I went past the place I'd seen her. Nike: as collectable as Banksy? Hmm. 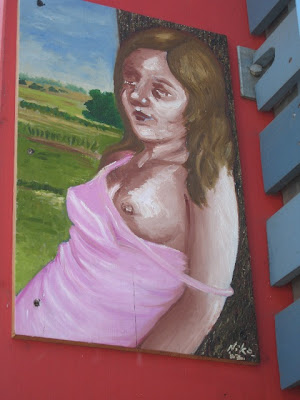 Oh, one more thing. This blog may come to an end in a few weeks, to be replaced by another with another name. I don't want to jinx anything, but I had a very encouraging talk with a landlady on Monday. Stay tuned.
Posted by Ed Ward at 3:10 PM

Ed, what (potentially) excellent news. My fingers and everything else are crossed for you.

William Dalrymple is sickeningly good, isn't he? I've got his From The Holy Mountain if you want to do a swap.