Down near the train station in Montpellier is a small park. In it is this monument. 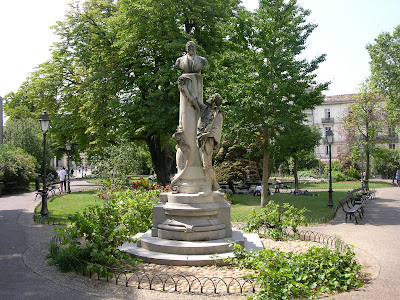 The place is marked on the map as Square Planchon, and this inscription (sorry, it's only partial) is another clue about what it's for. 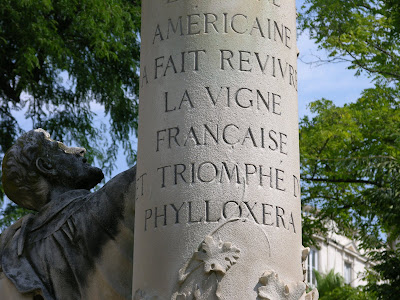 As it turns out, Jules Émile Planchon was a French botanist who was the head of the botany department at Montpellier University when the phylloxera plague started killing off all the French grapevines. In collaboration with Pierre-Marie-Alexis Millardet and the American Charles Valentine Riley, he discovered that importing American grape rootstock and grafting French vines onto it made the vines resistant to the organism that was spreading the plague.

So what we've got here is a thankful farmer offering thanks to Planchon and an inscription noting that it was the Americans who saved the French wine industry. See? The French don't hate us completely!
Posted by Ed Ward at 3:50 PM

Texans sometimes take credit for fixing France's phylloxera problem, because a Texan, Thomas Munson, did a lot of the fundamental research on American grape rootstock which proved so vital in the control of phylloxera. In appreciation, Cognac became a sister city of Denison, Texas. (There's a good Wikipedia entry on Munson with more information.) But in fact it was a joint effort involving Munson, Planchon and Riley.