Berlin and fashion are mentioned in the same sentence about as often as Milan and Mettwurst, but over the past weekend, Berlin actually played host to something called Fashion Week, which played out in my 'hood as something called Projekt Galerie, in which a large number of the (be nice!) second- and third-tier galleries in the area pushed the art to the side and hauled in rack after rack of clothing from designers who presumably rented the space from them. Given the quality of the art in most of these galleries, this was probably the first time they'd made any money in a great long while, and given the taste of some of the designers, hell, maybe they bought some of the art on display, who knows?

Entry was by invitation only, and for some reason, the world of fashion doesn't consider me a player, so I didn't look in, but one odd thing I noted from what I could see through the windows was that all the clothes seemed to be black, with the occasional bit of white. Whether this is the result of the informal local ban on non-black clothing, some sort of scheme to make it easier to see the lines of the garments, or what I can't say, but I did find it appropriate that the poster for the event, which was plastered on just about every flat surface around here, features (as you can see on the website) an androgynous head, blindfolded by a tightly-wrapped cloth. Was s/he being protected from the sight of the clothes, or of the art, I wonder.

At any rate, the fashionistas, who'd been rushing around clutching street maps and notebooks and wearing worried expressions, all vanished on Sunday, and I'd like to thank them for taking down all the posters, too; they were a unique form of pollution, and pretty annoying. I'm sure some money was thrown around; I saw some of these folks dining at local places, and the former copy-shop run by hostile Ossis on my block was transformed into a showroom for some designer whose sign is still in the window.

Ah, well, at least we didn't have the Love Parade this year...

It looks like street art is really in the forefront of people's minds these days. A few weeks ago, I was showing a visitor from Texas around, and noted that one of those funny alien dolls had appeared overnight on a wall by my place. "Gotta shoot that," I said, and made a note to do it. Two days later, here's all that remained: 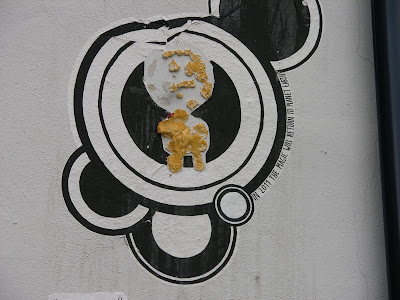 Below, the component parts of the doll, which had horns or ears, and a tongue sticking out -- clearly the best of all of this person's work I've yet seen -- were strewn all over the vacant lot, torn apart violently. Just why anyone would want to do this is beyond me, but then, I tend to respect other people's work in the hopes that they'll respect mine. I also remember Berliners' penchant for the "if I can't make art, I sure as hell can destroy it" meme, back when Keith Haring did a section of the Wall and within two hours it had had an orange line drawn across it (as every piece documenting it that I've seen has shown).

However, it wasn't as if the lot was devoid of art, because this had appeared: 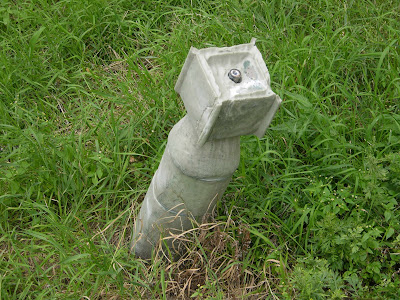 Given the amount of unexploded ordnance that keeps popping up here (anyone remember some years back when a bulldozer hitting a buried bomb took out the better part of a block in Friedrichshain and nobody but the bulldozer driver -- who was vaporized -- was hurt because they were all at work?)(Too bad that was before all the hipsters moved there, eh?) that's a pretty grim piece of art.

But it's not like the doll-maker's been silent; s/he's just learned to position the dolls so they're harder to mess with, and a couple of days ago, this showed up in a location I won't disclose (but I'm sure many can figure out): 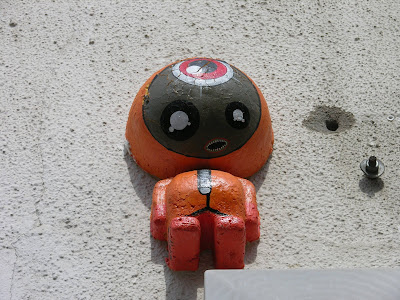 Not a great picture, but not all that easy to shoot, given the altitude and the intricacy of the face. Anybody know of any of these outside Mitte? I think I've tracked down all the ones here at one time or another.

And this post was going to include a photo of another amusing piece of street art which appeared a couple of days ago, showing Rambo as a Renaissance Madonna, but the one nearest me has vanished. The one at KW may still be up, though. It was also going to have a demented tiny doll someone stuck to the face of Hello Kitty on the sign on the shop on Rosenthaler Str., but it, too, was gone. Gotta move fast both to put this stuff up and to document it, I guess, and the cold rain last week just made me too lazy.
Posted by Ed Ward at 3:00 PM