I'm big enough to admit when the New York Times gets it right, and it seems that a couple of weeks ago, that's just what they did with their recent article on Brunnenstr. as the new art district of Berlin. Actually, it's one of several, and the more serious one is down on Zimmerstr. by Checkpoint Charlie where the big guns have huge spaces inside some kind of old warehouse. And I'd say there's a reason that the Times used a picture of a cute beagle instead of any of the art on display, because most of what I saw on a recent walk up the street from Rosenthaler Platz to Bernauer Str. was pretty boring. I'd say that the Brunnenstr. galleries are sort of an arts lab, where talent can be developed.

And it's kind of not fair for Peter Herrmann to have moved his exquisite gallery for African antiquities, currently showing some astonishing Ife bronzes from Nigeria, onto the block. It just makes the other galleries' daubings and scrapings look sick. Definitely worth a visit, though. (Interestingly, I've been in that building before, since it once held the Amiga recording studios, the place where all the DDR's pop acts recorded for the state label. A friend was recording a DDR dissident band called Die Vision there, as the tea-ladies cringed.)

But what's really not fair on Brunnenstr. is the blatant move by Sony to co-opt Berlin street art. A few weeks ago, I mentioned in passing that I'd noticed a lot of broken windows around town recently, one of them in the old Beate Uhse shop at the start of Brunnenstr next to the collection of greasy spoons. A little research shows why this has happened. First, we started seeing brown-paper circles that said www.dont-forget-the-game. com all over the place. When you go there, the first thing you come upon is a blog, which purports to discuss street art. Fine, but click on the photo gallery link and it gets more insidious.

It's an ad. In fact, if you go down to Brunnenstr. to the old Beate Uhse place, there's a bilingual sheet of paper posted there bragging that Sony has gotten Berlin street-artists to cooperate with them in promoting the new PlayStation Portable System (PSP) device. So we have a huge number of stencilled brown-paper women caressing huge PSPs, many of which have been defaced by street-artist 6, and everywhere you look, someone's stuck a PSP-shaped sticker with their custom design on it. Other "artists" have made PSP-shaped art which is on display around the corner on Torstr. in a fake art gallery.

Now I understand the rocks through the windows. And it's depressing to walk around and have to wonder if the latest piece of street art is, in fact, some lame-ass viral marketing campaign. I wonder how they enlisted these guys. Just handed 'em a PSP? Was money involved? I have to say, I saw one of these in action when I flew to America last month, and although the game being played was that moronic car-crash one, the graphics were extremely impressive. I wouldn't mind having one (well, if there were a game that could hold my interest for more than ten minutes, anyway, which there rarely are on these systems), but would I viral-write an article about it for one? I don't think so.

So boo to the supposed "street artists" who let themselves be pimped by Sony, hooray to the ad-busting graffiti artists who are sabotaging the campaign, and, like that car whose ads were everywhere a couple of monts ago -- what was it called again? -- may this fade from view as soon as possible.

Meanwhile, a bit of street art from Brunnenstr. that I really find impressive: 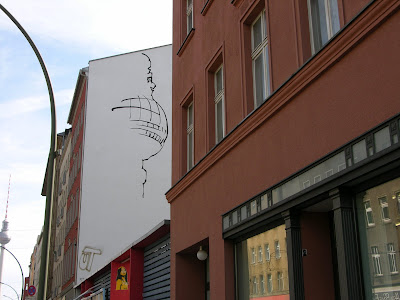 "currently showing some astonishing Ife bronzes from Nigeria". Er, closed since April 14, according to the web site...

damn, and i was planning to go down to Beate Uhse to pick up a few things this week...oh well, over to the Ku'damm again....

Well, the problem is that is it tough indeed to say what is real and what is not.

I was pleased by the rocks through the windows for these very reasons, but I wonder why they didn't finish the job.

Walking around Rosenthaler Platz last night, I was wondering where all the street art has gone. It's gone, over, done. It's nearly all adverts. For music (often on major labels), videos, mobile phones, Sony Playstations. Last night I counted 6 different pavement stencils, and the only one that wasn't obviously advertising anything (though it may well have been) had absolutely nothing to say, and was ugly too. What's the point of spray-painting a stencil of the words "Street Art Berlin" and a large X ? It was on the street, but it wasn't art. There's probably a book coming out soon with this logo on the front.

And when it comes to the Brunnenstraße, the photographic gallery Heckenhauer does show some nice things every now and again.

Olivier: Dang, that's what happens when Real Life intervenes. It really was a couple of weeks ago when I was up there. But he does exhibit some great stuff.

GC: Indeed that's the problem. And it looks like daggi has nailed it.

Daggi: Well, almost. You really do have to look for the good stuff. Alias has been putting up some nice pieces along there. But it is, indeed, a long while since the street artists had a headquarters just north of Invalidenstr. I'll check Heckenhauer, too.

and then there's mayday ads ;) like the sort of visceral response such a britney image would invoke?
[URL=http://imageshack.us][IMG]http://img116.imageshack.us/img116/3840/1ma