Good-bye to all that. Well, not good-bye, but here's the stack with just about every CD I played in 2006 in it, from which I drew the last two posts. Exceptions are the box sets and the discs I've used for radio pieces, which got filed elsewhere. As impressive as this stack is, it's not nearly as large as you'd think, especially once you subtract the many CDs with similar spines you see in there, which are CDs burned from downloaded Indian classical music, which I played a lot of this year, for some reason. 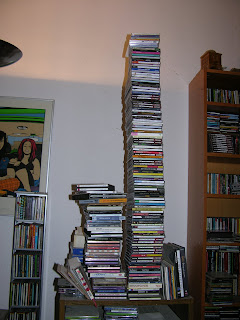 Sometime in the next couple of days, these will be filed away and a new stack will start.

Now, here's a campaign I can get behind! On Jan. 21, there'll be a vote as to whether to re-name a part of Kochstr. Rudi-Dutschke-Str. For those of you who don't know who he was, there's a decent bio of the charismatic left-wing rabble-rouser who later became a committed Green here in German. The really edgy thing about this proposal is the segment's propinquity to the Springer Verlag building, where Germany's right-wing press lord printed lies about the youth culture of the '60s and fostered the climate that saw Dutschke take three bullets to the head during a demonstration. He lived, but he was never the same again, and died after an epileptic seizure in his bathtub in 1979, aged 39. I'm not eligible to vote, but I'd be proud to if I could. Dutschke was the kind of thoughtful West Berlin politico this city needed more of, which, I guess, is why he was eventually driven to exile in Denmark.

I thought I'd seen the end of stupid brand-names with the Puky bicycles and the SMEG refrigerators, but no: visiting some website the other day, I saw an ad from Neckermann, a big German mail-order house, for their hip new line of footwear: Re-Ject Sneakers. Uhhh, guys? Sneakers are supposed to be a prestige item, not something for losers. Try again.

Okay, it's a cliche to talk about what the search engines are looking for when they hit your blog, but ever since someone in Turkey found me by searching for "fried tits," I've done my best to check out what's going on out there. I guess the search for "Berliner luft cake recipe" was pretty odd; I've never understood the obsession with the air here, and why it's supposed to be so special, but there really are songs about the "Berliner Luft." But a cake? I wouldn't touch it!

Still, this all fades into normality in the face of the person about a week ago who landed here after Googling "Mayonnaise spread on one's lawn to attract the zombies."

Not that I'm going to try that, understand.

And finally, one nice addition to the neighborhood that I discovered while walking around on New Year's Day: a new Nike! This is good because a number of her pieces have disappeared: the three identical women doing yoga, which was the first of hers I saw, the one outside Cafe Burger, and the fat girl by Friedrichstr. station, among others. I found another in Kreuzberg that I haven't shot yet, but it may no longer be there, because it had signs of having been attacked from below by a crowbar, and I found a couple yesterday in a part of Prenzlauer Berg I hadn't visited in about a year that I'm going back up to shoot soon. But, not very far from the mad installation Invalid Beach on Invalidenstr. here's Nike's new year present: 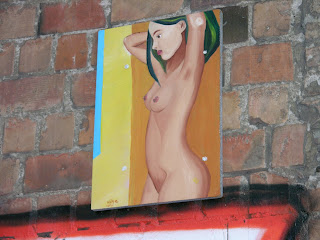 Rudi-Dutschke-Straße would be cool. Renaming the rest of Kochstr. Fritz-Teufel-Straße would be even cooler, though I guess they'd have to wait until he dies and for hell to freeze over.